Written by Kim Eun Sook and directed by Lee Eung Bok, the creative team behind “Goblin” and “Descendants of the Sun,” “Mr. Sunshine” tells the story of a Korean man who returns to his homeland as an American soldier after leaving for the United States on a warship in 1871.

The latest trailer highlights the tense relationship between the Westernized Eugene Choi (Lee Byung Hun) and the Joseon-era Go Ae Shin (Kim Tae Ri). In one shot, he faces her as two soldiers hold guns to her head, while in another the two hold their hands up to each other’s faces in a room. In a teaser photo released along with the trailers, the two shake hands on a rustic log bridge as another woman looks on.

The second trailer also features the appearances of secondary characters played by Kim Min Jung, the hostess at a hotel, and Byun Yo Han, Go Ae Shin’s fiancé. 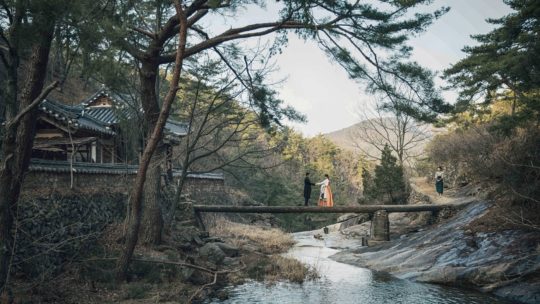 Watch the trailers below!