Wanna One has once again gained significant attention with their recent variety show appearances!

The Good Data Corporation revealed the ranking of the most buzzworthy television appearances from April 2 through 8. The results are based on the analysis of 2,422 cast members and guests from 185 non-drama programs through reactions on news articles, blog posts, online communities, social media, video clip view counts.

No. 3 and No. 4 went to Kim Hyun Woo and Oh Young Joo from “Heart Signal 2,” a dating reality program.

Park Shin Hye and So Ji Sub took fifth and sixth, respectively, with the new tvN program “Little House in the Forest.”

Although he did not appear in the first episode, EXO’s Xiumin placed No. 7 with “It’s Dangerous Beyond the Blankets.” 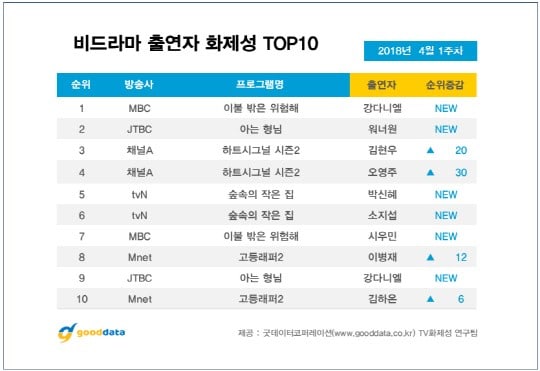 If you haven’t yet, catch the first episode of “It’s Dangerous Beyond the Blankets” below:

EXO
Wanna One
Xiumin
Ask Us Anything
Kang Daniel
It's Dangerous Beyond the Blankets
High School Rapper 2
Little House in the Forest
Heart Signal 2
HAON (Kim Ha On)
VINXEN (Lee Byung Jae)
How does this article make you feel?