On April 12, EXO-CBX continued their daily live broadcasts, during which they brought up their fellow EXO member Lay!

During the show, they shared stories about their first music show performance of “Blooming Day“on the April 12 broadcast of Mnet’s “M!Countdown” and discussed concerns that fans sent in beforehand.

While talking about various topics such as how they spend their time off and how they deal with feeling nervous on stage, EXO-CBX revealed how the EXO members support each other’s individual activities.

Sharing how they show interest and ask questions about each other’s activities and ongoing projects, Chen commented, “I think our members take care of each other really well.” Baekhyun added, “When we said we were prerecording at midnight [for ‘M!Countdown’], the members encouraged us.” The trio later gave another example and revealed how EXO helps Kai keep track of his stuff since he is prone to losing things.

EXO-CBX also brought up Sehun’s birthday, which falls on April 12, during the broadcast. “[After midnight], we all went crazy wishing him a happy birthday in our group chat, but there was no reply!” Baekhyun joked. “He didn’t answer until later in the morning.” They worriedly explained that it was because Sehun had fallen asleep early due to his filming schedule. 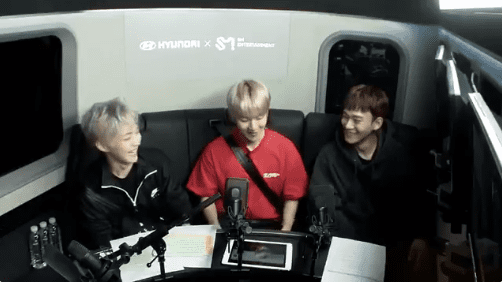 When a comment asked, “Do you talk to Lay,” Chen replied, “Of course! Even last night, for Sehun, we sent him birthday wishes together.” Baekhyun revealed, “Today, when Lay said, ‘Sehun, happy birthday,’ Sehun wrote back in Chinese characters, ‘Xiexie’ [thank you] and Lay replied, ‘Hey! You know how to write it in Chinese now!'”

After laughing at the memory, Chen expressed, “We talk and keep in touch with Lay like this. We’re all doing well.” Xiumin commented, “I really miss Lay,” and Baekhyun added, “I think it would be nice if we could promote all together this time.”

EXO-CBX will be continuing their promotions with “Blooming Day” and is also set to release their first full-length Japanese album “Magic” in May.

EXO
Lay
EXO-CBX
How does this article make you feel?