NU’EST W appeared on the latest episode of Mnet’s “I Can See Your Voice 5”!

“I Can See Your Voice” is a music variety show where celebrity guests try to distinguish tone-deaf contestants from skilled singers by watching them lip-sync. On the April 13 episode, NU’EST W, along with a celebrity panel that included music critic Lim Jin Mo and fellow “Produce 101 Season 2” veteran Jang Moon Bok, watched the contestants carefully as they tried to figure out their skill levels.

At the beginning of the show, NU’EST W excitedly said, “We think this is going to be fun.” When the MCs asked them which member they listened to the most, they replied, “We listen to our leader JR and Baekho the most.”

They continued, “Baekho looks like someone you should listen to. He’s dependable.” Kim Jong Kook made the audience laugh when he looked at the group and agreed.

Unfortunately, NU’EST W ended up having a difficult time with the challenge. During the first round, they guessed that the first contestant was tone-deaf after looking at the contestants’ appearances. However, he turned out to be a talented singer who almost became a member of V.O.S, and the show revealed that the trio had sent him a video message to cheer him on.

NU’EST W told the contestant, “If we count our trainee years, it took us nine years to appear on this program. We hope you won’t give up on your dream in the future.” 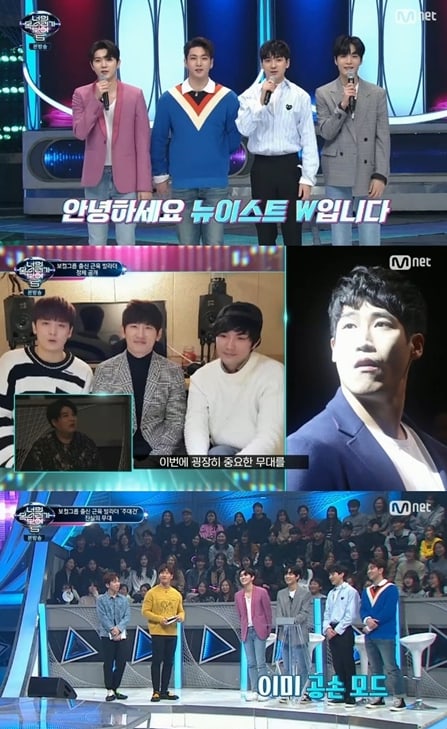 The idols continued to struggle with the challenge in the next round, incorrectly choosing classical singer Jo Sung Nyeo and another skilled singer as tone-deaf contestants. Jang Moon Bok particularly added to their confusion by saying that the latter contestant seemed like someone he knew.

Once their true identities were revealed, Jang Moon Bok apologized to the contestant for mistaking him for someone else, and Kim Jong Kook, who was touched by his voice, told him that he needed to be a singer.

After failing three consecutive times, NU’EST W finally managed to correctly guess that the sixth contestant was tone-deaf. In the end, however, they mistakenly chose another tone-deaf contestant to perform with them instead of the skilled fourth contestant, who turned out to be former comedian Lim Joon Hyuk.

Watch their hilarious final performance below!

NU'EST
I Can See Your Voice
NU'EST W
How does this article make you feel?