Upcoming drama KBS 2TV’s “Suits” has released a new teaser ahead of its premiere.

“Suits” is a remake of the popular American legal drama series. It will be about a genius named Go Yeon Woo (played by Park Hyung Sik) who doesn’t have a college degree or license to practice law, who gets hired as an associate by a legendary attorney at Korea’s top law firm named Choi Kang Suk (played by Jang Dong Gun).

The teaser begins with Park Hyung Sik walking along the side of the road at night. Jang Dong Gun’s voiceover asks him, “What do you think determines your fate? Money? Coincidence?”

Viewers also get a glimpse at the different lives of these two men. Dressed sharply in a suit, Jang Dong Gun walks through a hallway as people look at him with envy and respect. Meanwhile, Park Hyung Sik parties on stage with rapper BewhY. 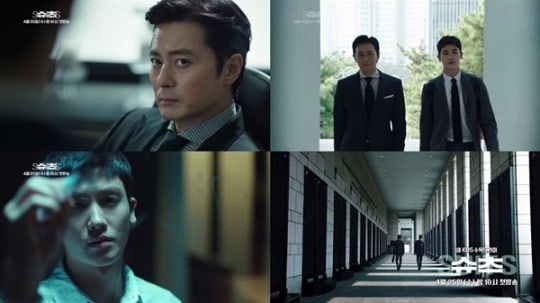 After some tense moments including a kiss and a chase, someone removes the blindfold covering the eyes of Lady Justice. Jang Dong Gun says to Park Hyung Sik, “It’s up to you to decide which rules you’ll follow in which situation.”

The words, “What determines fate isn’t coincidence but choice” flash across the screen. Jang Dong Gun says the first half and Park Hyung Sik finishes the sentence as they walk ahead together.