Rapper Loco couldn’t hide his admiration of MAMAMOO’s Hwasa on KBS 2TV’s “Hyena on the Keyboard.”

“Hyena on the Keyboard” is a music reality show that follows artists known for producing music and shows the process of them creating new music with other artists. The artists then perform the completed track on the show, before later releasing it on music sites online.

On the April 13 episode, Hwasa and Loco paired up after naming each other as artists they hoped to work with. Loco had previously mentioned the MAMAMOO member on KBS 2TV’s “Yoo Hee Yeol’s Sketchbook,” where he said, “I want to work with Hwasa. I need your voice. Give me a call.”

Loco’s wish was granted during the show, when Hwasa called him and said she wanted to work with him. He thanked her for the offer, and the two later met up at songwriter Woogie’s studio. 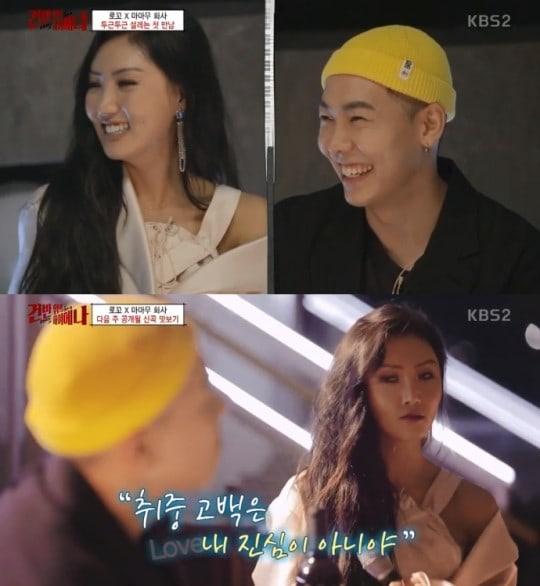 Loco continued to express his feelings for Hwasa while they brainstormed for their track. After hearing her sing, he commented with a big smile, “Your voice is so nice.”

Hwasa also talked about her preference for old pop, songs with guitar sounds, and the band Sting. When Woogie asked Loco what he liked, he shyly answered, “Hwasa.”

Loco didn’t stop there with his sweet lines. In order to find out about her vocal range, Woogie asked her which key she preferred to sing in. Because “key” also means height in Korean, Loco used a play on words to jokingly refer to his own height as he interjected, “How about 174 [centimeters]?”

“Hyena on the Keyboard” airs on Fridays at 11 p.m. KST. Check out the clip of Loco and Hwasa below!

MAMAMOO
Loco
Hwasa
Hyena on the Keyboard
How does this article make you feel?