Kim Joon Ho had one of the luckiest days ever on KBS’s “2 Days & 1 Night” and it was all thanks to the cast and crew!

The episode that aired on April 15 followed the cast as they set off on a trip to see the cherry blossoms bloom in Jinhae, Gyeongsang Southern Province. The opening scene began with the production staff revealing that they’ve been receiving many gifts from international fans, and that Kim Joon Ho was receiving the most gifts. He was touched when he was handed a doll of Charlie Chaplin, his idol, with a letter that read, “You are as funny as Charlie Chaplin.”

His good luck seemed to continue on throughout the day. While the cast was enjoying the cherry blossoms, passersby would comment on how handsome Kim Joon Ho was, and his smile grew wider as he received many compliments. He came in first place in the game to decide who gets to eat lunch, his first victory of the year, and even won an impromptu popularity contest. 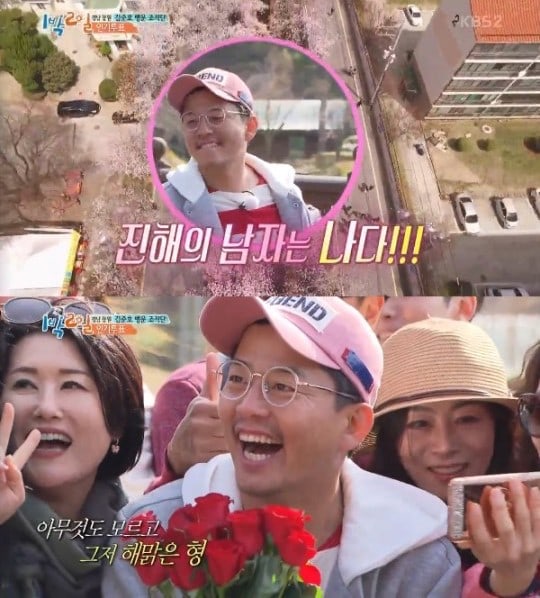 However, this had all been planned from the start. The other five members had met with the production staff and were told that the trip would be a “Kim Joon Ho Luck Creation Special.” The members were tasked with making sure Kim Joon Ho had the best day ever, and if he ever failed to come in first place or caught on to what was going on, they would lose and have to endure an intense two-hour hike up a mountain.

With so much on the line, the cast did everything they could do make the day special. They planted people to rig the popularity contest, they purposely lost at games, and they even called up Kim Joon Ho’s friends to figure out what compliments he likes to hear. The cast and crew even wrote up a detailed script to make sure the day was perfect. 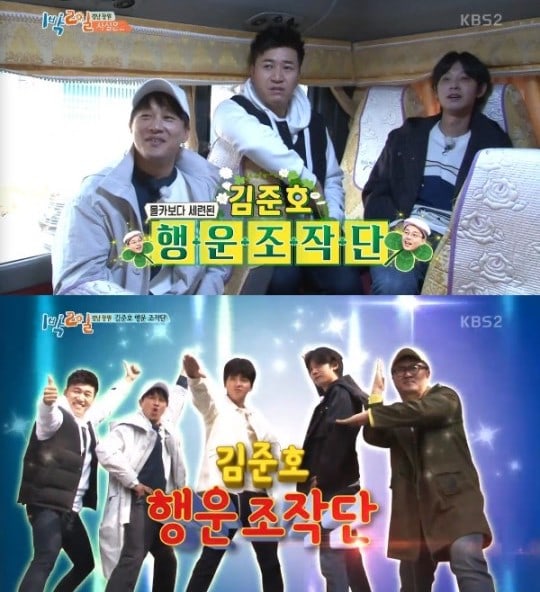 The reason the special was planned was to boost Kim Joon Ho’s morale. He had lost 15 consecutive games in a row, from the New Year’s special till the previous week. Because of his continued losses, Kim Joon Ho seemed to be a little deflated, so the cast and crew got together to create a lucky day for him, but in their own unique way. Not realizing this despite his unusual good luck, Kim Joon Ho was smiling brightly all day at his good fortunes.

Whether the cast will succeed in making the perfect trip for Kim Joon Ho will be revealed next week. Catch up with the latest available episode of “2 Days & 1 Night” below!