Song Ji Hyo is in for a day of stress as her younger brother Cheon Seong Moon appears as a guest on her beauty show “Song Ji Hyo’s Beautiful Life”!

Cheon Seong Moon previously stole the show when he appeared on “Running Man.” He will be joining his older sister in a corner called “Burning Time” where they go on a dieting program together. Song Ji Hyo is said to have looked nervous from the moment cameras started rolling, and she grabbed her hair and shouted when her brother appeared. She awkwardly smiled and said, “I want to go home.”

In a game to test their closeness, Cheon Seong Moon was tasked with sharing facts about Song Ji Hyo that no one else knows. The siblings exchanged a laser-like gaze before the game began. The game involved Song Ji Hyo wearing a pair of headphones so she couldn’t hear what her brother was saying, and she did her best to dance and create a distraction. Despite this, Cheon Seong Moon had everyone laughing as he dropped truth bombs like “My older sister orders me around at home,” and “She treats me so badly that it’s only been a year since we became close.” 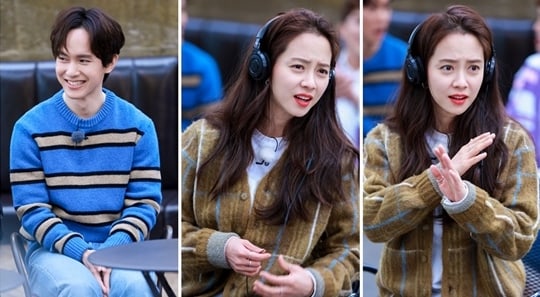 The production staff stated, “Cheon Seong Moon’s statements about Song Ji Hyo had everyone laughing so hard that they were clutching their stomachs in pain. The episode will be one to watch as siblings Song Ji Hyo and Cheon Seong Moon bicker.”

“Song Ji Hyo’s Beautiful Life” is a beauty reality program where the four MCs travel around to personally try the latest beauty trends. The upcoming episode will air on April 17 at 9 p.m. KST.