“Busted!” PD Shares Why He Chose Cast Members And How The Show Differs From “Crime Scene”

With Netflix original series “Busted!” set to premiere soon, producing director (PD) Jo Hyo Jin sat down with YTN STAR to discuss how he put the cast together, and how their show will differ from another popular crime-themed program “Crime Scene.”

“Busted!” will follow Yoo Jae Suk, Ahn Jae Wook, Kim Jong Min, Lee Kwang Soo, Park Min Young, EXO’s Sehun, and gugudan’s Kim Sejeong as they try to find the answers to mysterious cases. The PD explained, “Our temporary title for the show was ‘Dumb and Dumber Detective.” We wanted to create a show where ordinary people become detectives and solve crimes, and Netflix really liked that idea. Though the cast are a little lacking at times, they also surprised us at other moments. There were also times where they stumbled into answers, and I think the show came out really well.”

Though most crime-themed variety shows will have the contestants competing against each other, “Busted!” will have all seven cast members working together to solve a case. Because of this, teamwork was a very important factor in creating the show. Jo Hyo Jin explained, “I knew that the show wouldn’t work with Yoo Jae Suk. It’s not an easy format to follow, and I knew we needed a variety show veteran. Yoo Jae Suk has said he likes solving mysteries, and we had a high level of trust in each other since we’ve worked together for almost 15 years from “X-man” to “Running Man.”

Kim Jong Min and Lee Kwang Soo were added to bring more laughs and accentuate the “Dumb and Dumber” concept, while they were balanced out by the more serious Ahn Jae Wook and Park Min Young. Sehun and Kim Sejeong energized the group with their youthful passion. The PD said, “Yoo Jae Suk was happy to hear that he’d be working with both Lee Kwang Soo and Kim Jong Min. It’s not that they try to be funny, but they’re just naturally funny in what they do. Ahn Jae Wook seems like he’s always standing back and watching others, but he’ll be in the lead to investigate whenever something happens, and he played an integral role in keeping the team together as the oldest member.”

He went on to state, “Park Min Young had an easy-going personality and always worked very hard. She had a keen sense and her investigative skills are great, so the others relied on her a lot. Sehun was full of determination and his competitive streak grew stronger every moment, so he’ll be one to watch for. Kim Sejeong always does her best no matter what she’s given, so I actually told her she can relax a little. I’m happy because I think she was able to truly enjoy the experience.” 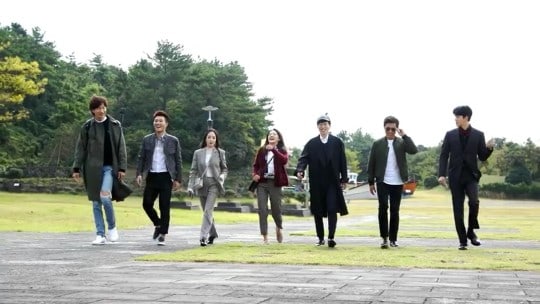 Jo Hyo Jin was also asked how different “Busted!” will be from another popular investigative variety show “Crime Scene.” He explained, “In ‘Crime Scene,’ each person is given a character to play and they have to find the culprit hiding amongst them. Role playing seems to be a major part of their show. For our show, all of the cast members play themselves, and they work together to face new cases. Because it’s a reality show, there will be a lot of variables. The cast had to prepare second and third backup plans because the outcomes changed depending on how they went about solving a case.”

“Busted!” will premiere on May 4 on Netflix, with two new episodes being released every week for five weeks. Don’t forget to check out the teaser for the show!