BIGBANG’s Seungri recently made a special appearance on the April 18 broadcast of JTBC’s “Let’s Eat Dinner Together,” which took place in Vladivostok, Russia.

The hosts Lee Kyung Kyu and Kang Ho Dong met up with Seungri, who was attempting to say Russian phrases on the streets of Vladivostok. Seungri told them, “I heard that the Russian market was going to be huge, so I came to inspect it. According to last year’s statistics, there were 500,000 tourists in Vladivostok. I’m wondering what kind of business I can open up here.” While he first showed confidence in speaking Russian, Seungri honestly confessed, “I started [learning] Russian just a moment ago.”

On their way to visit the Korean community association, a Russian woman asked Seungri for a photo, which he wholeheartedly agreed to do with a content smile on his face. However, it turned out her Korean friend actually wanted a photo of Kang Ho Dong because he was a famous wrestler. When the woman revealed she didn’t know who Seungri was, he started to sing BIGBANG’s hit songs right then and there. 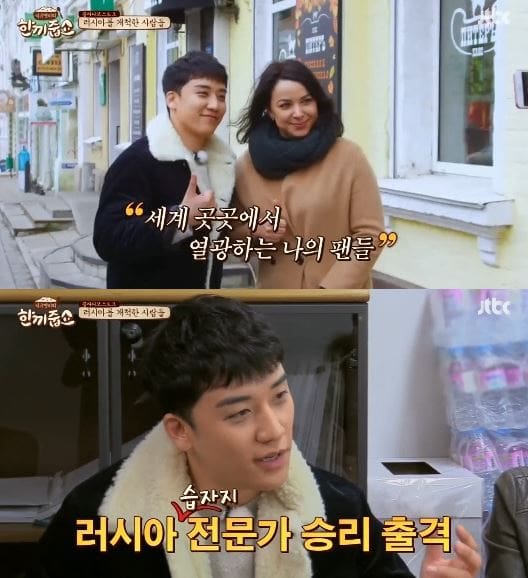 At the Korean community association, the three celebrities were told finding a Korean family to eat with wasn’t going to be an easy task, making them feel uneasy. Another Korean person they met earlier had also told them, “It could either be spectacular, or it could be a failure.” To help them, the community association informed them of an apartment complex where many Koreans lived, and they headed over there.

After many complications, the three of them arrived at the apartment complex, but it wasn’t easy to gain access into the building. However, miraculously enough, the first family they asked agreed to host them for dinner.

The family, who was going to be returning to Korea in a few days, revealed their special link to Kang Ho Dong. The eldest son had appeared in a show that Kang Ho Dong had hosted before. The mother said, “I said yes to dinner because I think this will be a special memory for my son.” 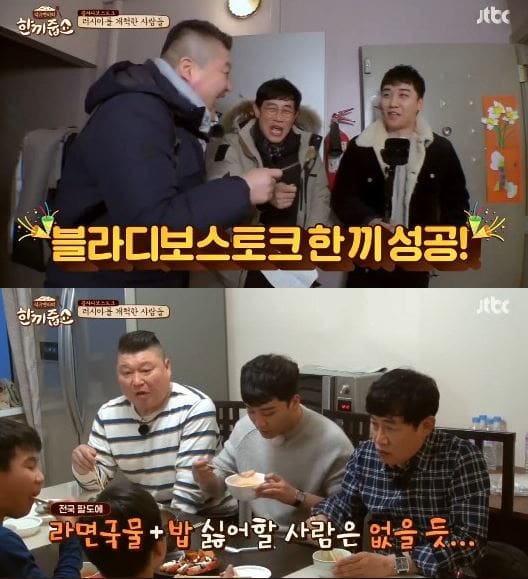 Like the CEO of a ramen restaurant he is, Seungri made ramen for the family, and they all enjoyed the special meal together.

Would you eat dinner with Seungri if he rang your doorbell?

BIGBANG
Seungri
Let's Eat Dinner Together
How does this article make you feel?