SBS’s upcoming drama “Wok of Love” has unveiled its first stills of Jang Hyuk in character!

The newly released photos from the romantic comedy show Jang Hyuk in his role as Doo Chil Sung, a loan shark and former gangster who has recently been released from prison. Although he was once a notorious mobster known for his legendary knife skills, he is now merely the owner of an unglamorous neighborhood Chinese restaurant.

In the drama, Doo Chil Sung displays both unwavering loyalty to his former fellow prison inmates and a fierce, bold determination to win over the woman with whom he fell in love at first sight.

The photos feature Jang Hyuk sporting a chic pair of sunglasses as he basks in the sunlight and struts confidently down the streets of his neighborhood. According to the production staff, the veteran actor wasn’t afraid to play up the comical side of his character, throwing himself into his role with abandon.

The producers remarked, “Jang Hyuk is an actor who heightens the charms of a character. Not only does he thoroughly analyze his character’s personality, but he also impresses us on set with his ad libs. The set is always lively and full of laughter whenever Jang Hyuk is around.” 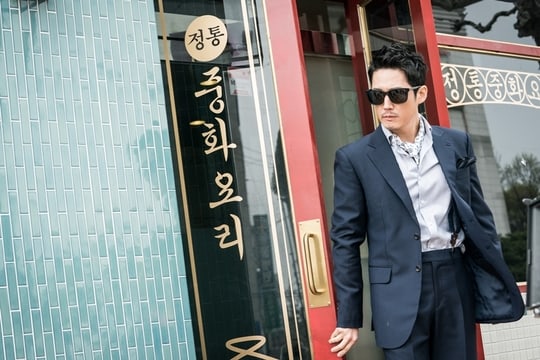 They continued, “From the first day of filming, Jang Hyuk turned into Doo Chil Sung himself. Please look forward to his transformation.”

“Wok of Love,” which will also star 2PM’s Junho and Jung Ryeo Won, premieres on May 7 at 10 p.m. KST. The drama will be available with English subtitles on Viki.

In the meantime, check out the teaser for the drama here!