Son Ye Jin and Jung Hae In have been showing off great chemistry on JTBC’s “Pretty Noona Who Buys Me Food.” The romance between Jin Ah (Son Ye Jin) and Joon Hee (Jung Hae In) are highlighted not only by amazing acting skills and great visuals but also by lines that are always on-spot.

Here are the three memorable lines that embrace the essence of their relationship. 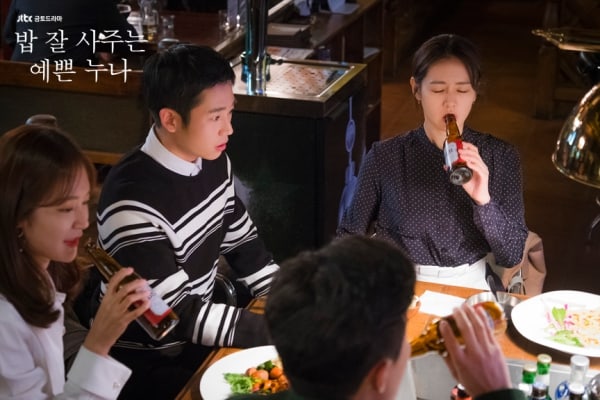 Jin Ah and Joon Hee knew they had feelings for each other but it was difficult for either one to make the first move. When Jin Ah finally stepped up and secretly held Joon Hee’s hand under the table during a night out with their co-workers, Joon Hee didn’t miss the opportunity and held onto her hand.

Joon Hee told her later in the night when they were alone, “Why did you hold my hand first? I wanted to do it first.” Jin Ah replied, “When? You don’t know how important timing is between a man and a woman.” Hearing this, Joon Hee asked back with a smile, “We’re now man and woman?”

Although Jin Ah shied away from answering, the two held hands again, marking the beginning of their romantic relationship. 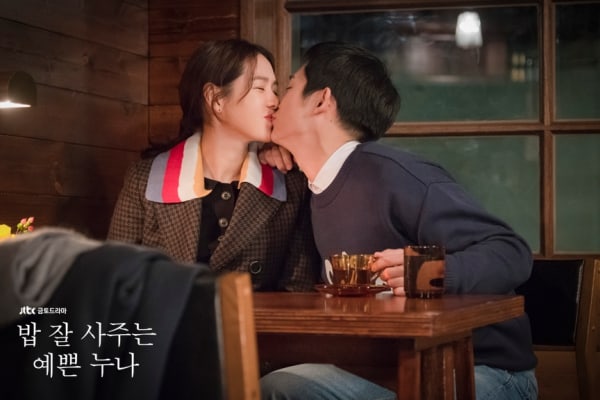 Trouble sparked when Joon Hee’s oblivious sister offered to introduce Jin Ah to another man. Being close friends with Jin Ah as well, she even brought up the topic of Jin Ah’s ex-boyfriend.

Joon Hee soon left the scene, caught up in jealousy and anger. Jin Ah quickly went after him and burst out laughing when she saw how upset he was over something so trivial. As he kept pouting, Jin Ah gave him a hug and said, “I trust you. I’ll always trust you. So let’s not waver at small things. Like professionals.”

Jin Ah was always the insecure one in their relationship, but here she emerged as the mature, assuring person comforting Joon Hee. 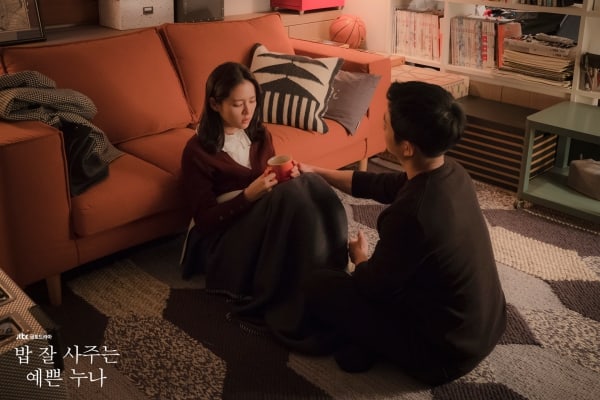 Hiding from the eyes of her family, Jin Ah often spent nights out of home to meet Joon Hee. Her father Yoon Sang Ki (Oh Man Seok) was the first one to see through her lies. Instead of telling her off, he decided to wait for her to come up to him honestly.

When Jin Ah felt guilty and sorry towards her father, Joon Hee comforted her and told her sincerely, “Yoon Jin Ah, I love you.” After a moment, he repeated again in a shaky voice, “I really love you a lot.”

“Pretty Noona Who Buys Me Food” airs every Friday and Saturday at 11 p.m. KST.