During the segment “Do Re Mi Market,” the cast of the show listens to a brief clip of a song and then writes down what they think the lyrics are for that part of the song. In order to win the delicious food at stake, they must correctly guess the lyrics that they heard.

On the April 21 episode of the program, host Boom announced that the first round would feature a song by EXO. Upon hearing the name of his labelmate, Key smiled and confidently declared, “Of course I know EXO’s songs.” He went on to boast, “I was the one who got TaeTiSeo’s lyrics right last week too. SM songs have their own unique paradigm, so it’s easy to get [the lyrics] right.”

However, after listening to the short clip of Chanyeol‘s rap in EXO’s “Lotto,” Key’s confidence began to waver. Although the cast listened attentively to the song, none of them were able to figure out the correct lyrics.

When they expectantly turned to Key for his answer, he hid his head in embarrassment as they read his completely incorrect guess: “The day that I become your husband, you stand there with golden proportions.” 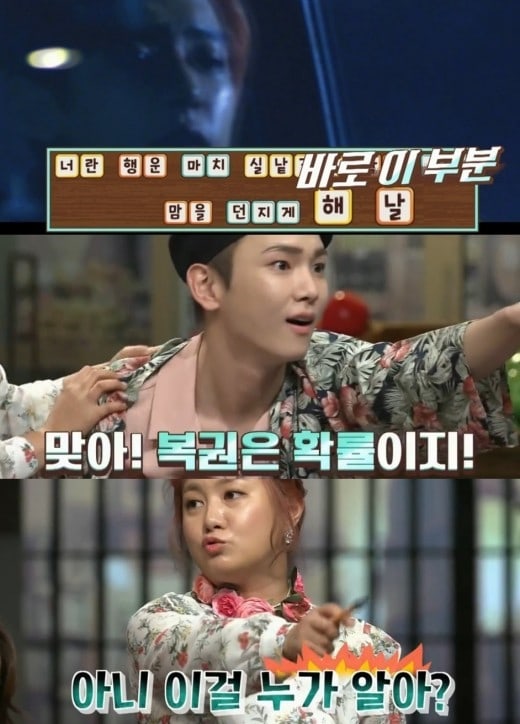 Fortunately, after many failed attempts to guess the lyrics, Boom helped the cast out by giving them a hint, and they were able to figure out the correct answer: “You’re my luck, you make me throw my heart into a thread-like chance.”

EXO
SHINee
Key
Amazing Saturday
How does this article make you feel?