The April 22 episode of MBC’s “King of Masked Singer” began with performances for Round 2.

During this round, Comb Pattern Pottery went up against Carillon, with the former covering TVXQ’s “Mirotic.” Carillon, meanwhile, put on a emotional performance of Paul Kim’s “The Road.” Later, Carillon also displayed his excellent dancing skills for the panel.

In the end, Comb Pattern Pottery won the round and Carillon unmasked himself to reveal his identity as former INFINITE member and current solo artist and actor Hoya (Lee Ho Won). 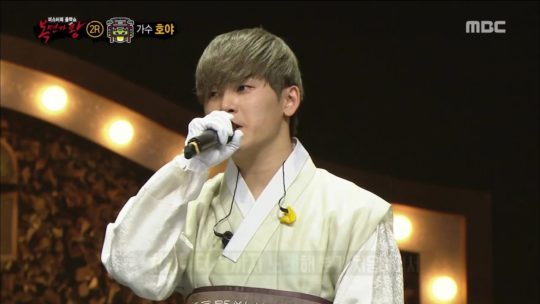 Hoya said, “This is the first time I’ve sung by myself from start to finish on a TV show, so I was too nervous,” he said. “I could feel my voice shaking and I regret that.”

He added, “I’m at an agency where there’s a lot of actors but I put out a new album not too long ago. I feel like I was too nervous today to enjoy myself, so I hope to appear as one of the panelists next time and enjoy the experience.”

In an interview backstage he said, “I think there are a lot of people who don’t know my voice. I wanted to use this opportunity to show the world that Hoya’s voice sounded like this. If people look up my music and listen to it even once I am grateful.”

Watch the latest episode of “King of Masked Singer” below:

Hoya
The King of Mask Singer
How does this article make you feel?