Veteran actor and film director Cha In Pyo appeared as the eighth master on SBS’s “Master in the House”!

On the April 22 episode of the show, Lee Seung Gi, BTOB’s Yook Sungjae, Lee Sang Yoon, and Yang Se Hyung headed to a movie production company to meet their newest master. Waiting for them was a note that read, “Write your resume while waiting.” While they were filling out their resumes, Cha In Pyo walked into the room and revealed himself to be their next master.

After greeting the members, Cha In Pyo looked over their resumes and assigned each member a specific job on his film’s directing and production teams. While he was grilling the members with interview questions, they pointed out how similar he and Lee Seung Gi were in terms of personality. 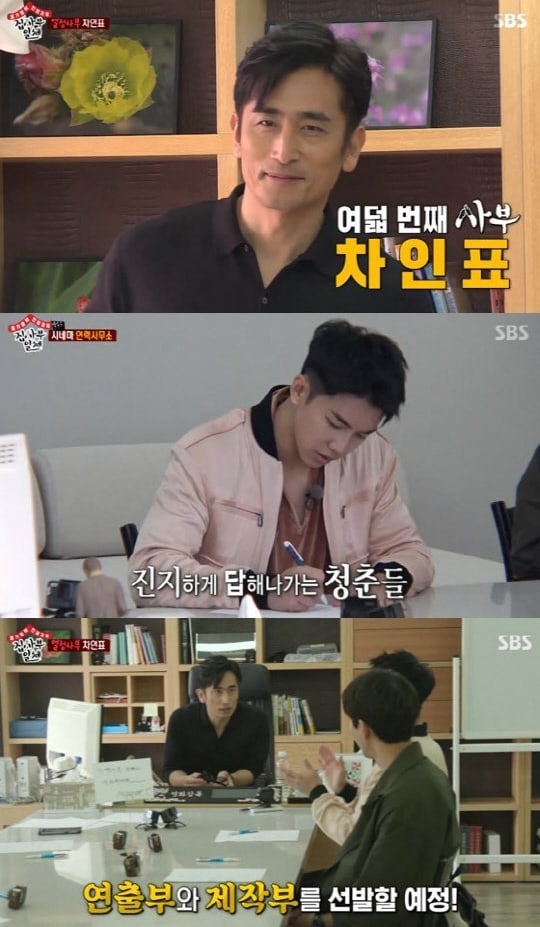 In the end, Cha In Pyo chose Lee Seung Gi as his assistant director and tasked him with filming the behind-the-scenes video for his movie. He also instructed Lee Seung Gi, “Focus on me while filming.”

Yang Se Hyung commented, “When Seung Gi grows up, this is what he’ll be like.” Lee Seung Gi laughed and said, “He’s the first person who’s told me to do things that I already wanted to do.”

Cha In Pyo also revealed that he has been working on a film about the nonverbal comedy group Ongals and their attempt to break into the U.S. market.

He explained, “I’ve been working on producing this since January. I met the group while doing volunteer work about seven or eight years ago. Last year, when I asked them what they’d been up to, they said that they wanted to try entering the U.S. market, but they didn’t have money for airfare. So I paid for their plane tickets and decided to film a documentary about them.”

The Ongals initially failed to become popular after they first debuted in Korea. However, after saving up the money they earned from their restaurant jobs, they managed to enter the Edinburgh Comedy Festival in Scotland and gain some popularity.