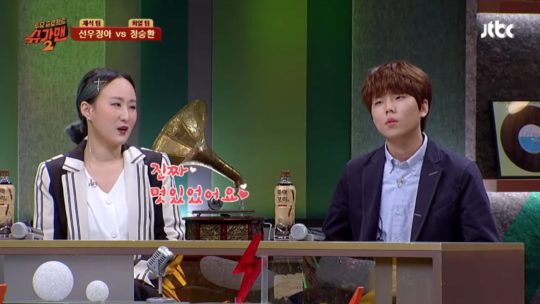 Before they got to the performances, however, Jung Seung Hwan had something up his sleeve to “impress” Yoo Hee Yeol, who is an MC on the show and also the founder of Jung Seung Hwan’s label, Antenna Music. He had prepared an acrostic poem with the three characters of Yoo Hee Yeol’s name with a little sting in the tail, prompting the MC to retort, “Do you know how I’ve taken care of you all this time?” 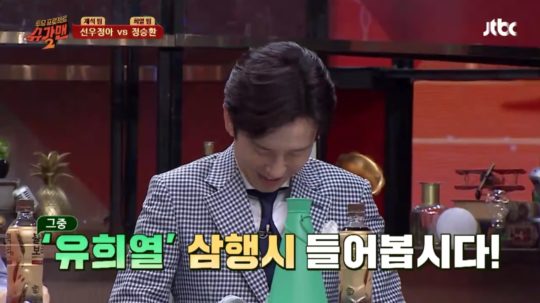 Jung Seung Hwan then surprised the other panelists by sharing that he had started taking dance lessons at Antenna Music, despite being a ballad singer. “I’ve been learning for about two years,” he said.

Yoo Hee Yeol then shared a funny story about Jung Seung Hwan, saying, “[Ever since he started taking dance classes], he walks around with his head up and says to me, ‘I should have become an idol.'” Park Narae noted that reportedly he had even covered BTS’s “DNA” at a recent concert. 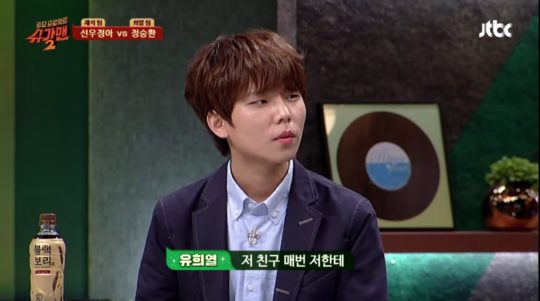 When he showed them what he had learned, he did pretty well at first but soon forgot the moves, prompting Yoo Hee Yeol to come after him on stage.

Back in March, Jung Seung Hwan had posted clips of himself learning the dance on his personal Instagram account.

BTS
Jung Seung Hwan
Sugar Man 2
How does this article make you feel?