B1A4 celebrated their 7th anniversary on April 23 with their fans!

The guys hosted a special broadcast on Naver’s V Live that evening where they talked about how grateful they are to their fans and looked back on memories of their time together so far.

B1A4 shared some of their thoughts on their 7th anniversary, and also celebrated with a cake, wine, and food. Jinyoung said, “It’s already been 7 years since we debuted. Now that I think about it, I think a lot has happened.”

Sandeul also explained that he was tired because he’d posted on the fan cafe at 4:23 a.m., to fit with their anniversary date of April 23. CNU made them laugh when he said, “I saw your post, but it seemed like you’d had a drink.” Baro admitted that he’d planned to post right at midnight, but he’d fallen asleep at 11 p.m. instead.

B1A4 was sure to thank their fans for being with them for the past seven years, and also spoke to each other about their thoughts. Gongchan said he’s grateful for CNU, and told the story of how CNU had bought him a hoodie just like his own while they were on tour, after Gongchan had said he liked it.

Baro commented that he’s been feeling the physical effects of getting older lately, and said to them, “I hope that we will be together all our lives, without any illness. If someone is hurt, then the person beside them too feels upset.”

Jinyoung also stressed the importance of their health. He added, “We’ve been working hard together for the past seven years while relying on each other. I think time goes by really fast. I’m proud that I’ve been together with the members for seven years.”

Sandeul said he’s happy that the five members all seem united as one, and CNU said, “We’re a good fit for each other and I think we’re considerate of each other.” 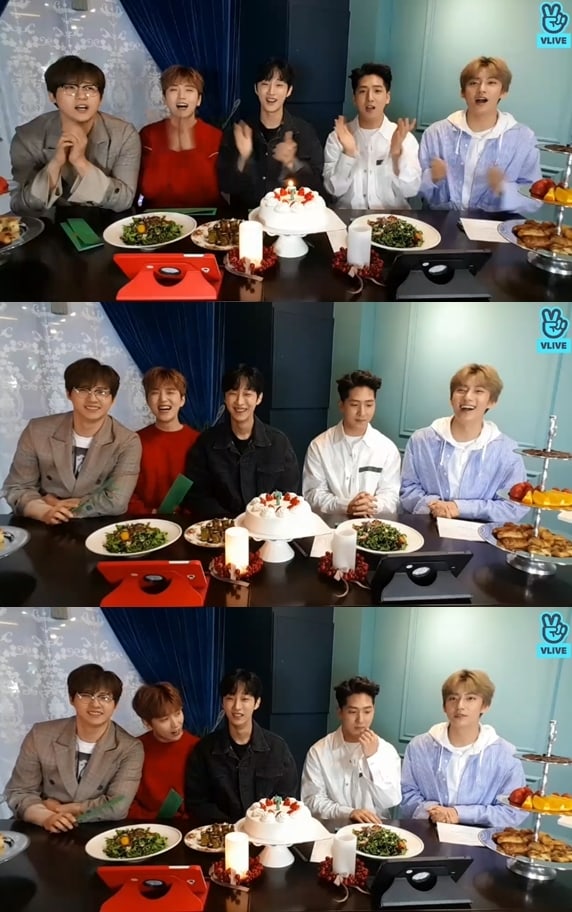 When the guys talked about their memories from the past, CNU fondly remembered how when they were trainees, Baro’s mother would send delicious sandwiches that she’d made for them. The members also reminisced about eating together and watching soccer at each other’s homes.

Sandeul told a memorable story from when Jinyoung had to bungee jump when they were filming for a DVD. Sandeul said that Jinyoung had hesitated for 10 minutes, unable to make the jump. However, one of them then said to him, ‘If you don’t jump, B1A4 will be ruined!’ Sandeul said that made him jump right away.

“I believe in the power of words,” explained Jinyoung. “I didn’t want B1A4 to be ruined because of me.”

The members also talked about great memories such as taking first place on music shows, getting to see their fans up close while performing concerts for five days, and more.