2PM’s Junho recently talked about his role in SBS’s upcoming drama “Wok of Love.” In this romantic comedy, Junho plays the character Seo Poong, a chef who specializes in Chinese cuisine.

Junho explained that he chose to participate in “Wok of Love” mostly because he had faith in the drama’s producing director and writer. “First of all, I thought it would be fun,” he said. “I wanted to do a drama that was different from my previous one, ‘Just Between Lovers.’ More than anything, I had high expectations for writer Seo Sook Hyang and producing director Park Sun Ho, who directed ‘Suspicious Partner.'” As writer Seo Sook Hyang previously worked on the popular chef drama “Pasta,” many are curious to see how the writer’s drama about Chinese cuisine will unfold.

Junho’s character Seo Poong is a talented chef who wins two Michelin stars for his fancy Chinese restaurant but soon falls from the top and ends up in a neighborhood joint on the verge of closing down. “He’s like fire when working but like a sunflower when it comes to love,” Junho said. “He is charismatic in the kitchen and pure in terms of romance.” 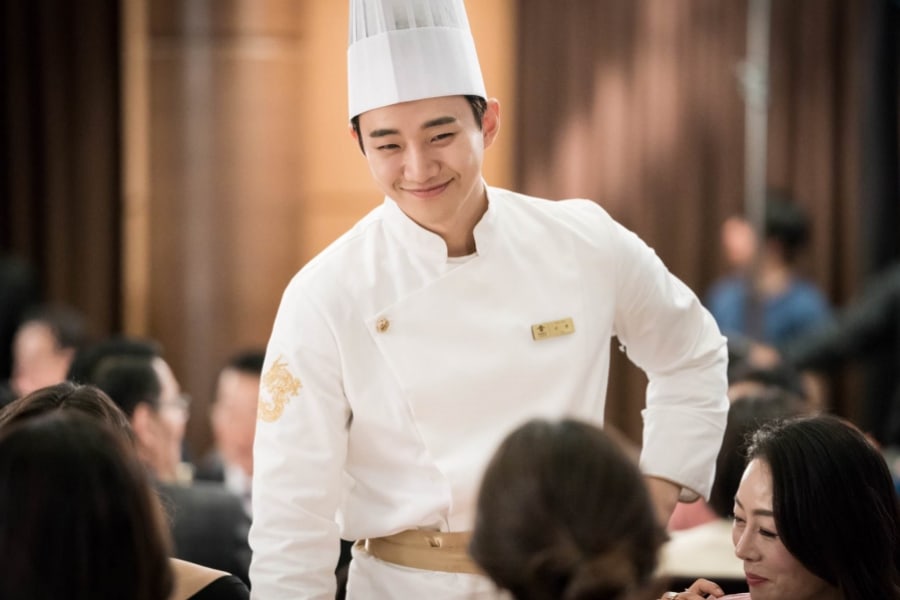 Because Seo Poong is a talented chef who has mastered the art of using a wok, Junho has been putting in great efforts to transform into a skilled chef. He shared, “I’m learning from chef Kim Jung Rae in person. Woks are heavy and difficult. I was very nervous at first because I have to do this in front of the hot fire. Now I’m getting used to it.”

He continued, “I know that getting two Michelin stars is something that’s incredibly impressive and difficult. To make such an achievement, I thought there should be considerable charisma in the kitchen. That’s how I’m shaping the character.”

This will be Junho’s first time acting in a romantic comedy as well as being a lead in a terrestrial network drama. “‘Wok of Love’ will be another challenge for me. I think I’ll be able to show a different side of myself through this,” Junho said.