TWICE will be taking over “Running Man”!

The upcoming episode of “Running Man” that will air on April 29 will celebrate the one year anniversary of Jun So Min and Yang Se Chan joining the show, along with a guest appearance by all nine members of TWICE.

TWICE engaged in a “War of Aegyo” during the show for a mission, each incorporating their unique personalities and styles. The shower of aegyo from TWICE brightened up the set, and the show’s resident “Tiger” Kim Jong Kook especially had everyone laughing because he was unable to stop smiling as he watched on. 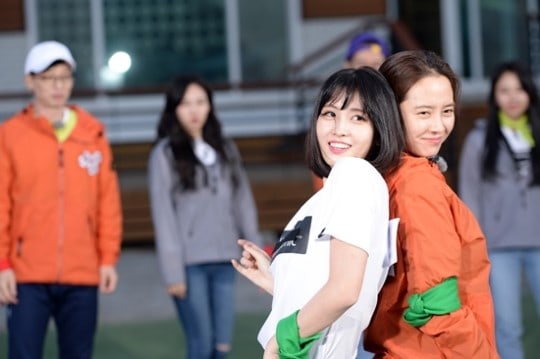 The members of TWICE also showcased their various talents and also danced together. TWICE’s “dancing machine” Momo captivated with her outstanding dance skills, and she even got Song Ji Hyo, who is known to be quite wooden when she tries to dance, up on her feet and dancing along. Dahyun showcased an interesting dance move she called “the dish dance,” and the set was filled with laughter as TWICE and the “Running Man” cast had fun dancing together.

TWICE’s guest appearance on “Running Man” will air on April 29 at 4:50 p.m. KST. Check out the latest episode of the show below!

TWICE
Running Man
How does this article make you feel?