The latest episode of MBC’s “King of Masked Singer” revealed the identity of “Endorphin Cruise” to be the youngest member of a female idol group whose members have all now appeared on the show!

“King of Masked Singer” aired on April 29 and featured stellar performances by contestants aiming to become the last person standing in the end. The first round featured a battle between “Safari” and “Endorphin Cruise,” and the duo performed Sung Si Kyung and IU’s “It’s You.” Their sweet and clear voices rang out in the studio and enthralled the audience.

Though both impressed, the victory went to “Safari,” who moved on to the next round with a vote of 63 to 36.

“Endorphin Cruise” performed Lee Sang Eun’s “Secret Garden” and took off her mask, revealing herself to be EXID’s youngest member Jeonghwa. With her appearance, EXID has become the first girl group to have all their members appear as contestants on the show. When asked if the other members had given her any advice, Jeonghwa said, “They told me to do whatever I wanted on stage.” 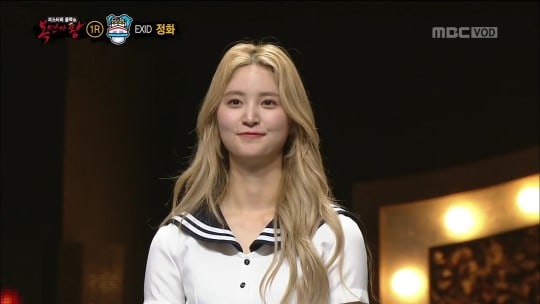 She also shared that she’s been working on writing new music. Jeonghwa said, “I’ve made a new alias for myself under the name ‘PP.’ Usually, LE works on making all the music and writing lyrics for our group, but recently, I’ve wanted to share the music inside of me as well. I’ve started working on some music with a style that suits me.”

On why she decided to appear on the show, Jeonghwa shared, “I hope I see this broadcast when it airs. I have a lot of fears about change. Appearing on ‘King of Masked Singer’ was a challenge for me because it required me to create a stage just for myself, so I hope I watch myself on the show later to see how courageous I was.”

After the show, Jeonghwa took to her personal Instagram account to open up about her experience. She stated, “I had the chance to sing as ‘Endorphin Cruise’ on ‘King of Masked Singer’! I got on stage knowing that it took a lot of courage for me to take on this new challenge, and I think it was a precious experience for me as it helped me believe in myself more. With this new experience under my belt, I will work hard to believe in myself and show that new side of myself in the future! Thank you!

Check out her performance in the latest episode of “King of Masked Singer” below!

EXID
Jeonghwa
The King of Mask Singer
How does this article make you feel?