There are some themes and scenes that are familiar in K-pop music videos: idols posing in fancy cars, partying the night away, and even dancing in parking garages. But there are also some more obscure and downright odd tropes that have, for whatever reason, become inexplicably pervasive in K-pop MVs. They may be a bit nonsensical, but don’t be surprised if at least one of these weird tropes shows up in the next music video you watch!

Bathtubs are standard household appliances, so it makes sense that they would make the occasional appearance in an MV. It makes markedly less sense, however, when they appear in places besides bathrooms — yet K-pop videos have an inexplicable tendency to put them in all sorts of odd locations. Take BEAST’s “YeY,” Jessica’s “Fly,” and Sunmi’s “Gashina,” for instance:

Why is Yoon Doo Joon’s bathtub on the roof?

Why is Jessica’s tub in the desert?

Why is Sunmi’s bathtub gliding through a field of giant, blooming flowers?

We have a lot of unanswered questions about these tubs, but the trope doesn’t end here, because K-pop MVs take it to the next level with…

Because why bathe in water when you can bathe in soft, gooey chocolate chip and snickerdoodle?

And why use your bathtub for bathing at all, when you can fill it with frosted, sugary deliciousness?

Who wouldn’t want a tub filled with an endless supply of bubblegum? Or are they just colorful balls? Neither is particularly normal.

It’s not just bathtubs, though: K-pop MVs have a strange obsession with shopping carts as well, repurposing them for various uses that have little to do with shopping. Wanna One’s “Energetic” makes a shopping cart look like the most outrageously entertaining mode of transportation ever discovered:

And Highlight’s “Plz Don’t Be Sad” turns one into an essential dance prop:

At least BIGBANG is actually in a grocery store with their cart in “Lies,” although their grocery shopping is rendered rather ineffective by the fact that T.O.P takes up all of the space in the cart.

But judging by the presence of the woman the guys are singing to, it was probably never about the groceries anyway.

If they’re in a BTS MV, washing machines must mean something, right? And one can certainly find something poetic, beautiful, and deeply profound in the way that the “Spring Day” video shows clothing spinning around and around, kind of like the cyclical nature of the seasons, life, and the universe…

One could probably also find some symbolism in the laundry machine in EXO’s “Ko Ko Bop,” but I’m too concerned about how and why Suho ended up doll-sized and floating in it. Is he okay? Should we send some help? Why is Chanyeol sitting on top of the machine instead of getting him out? 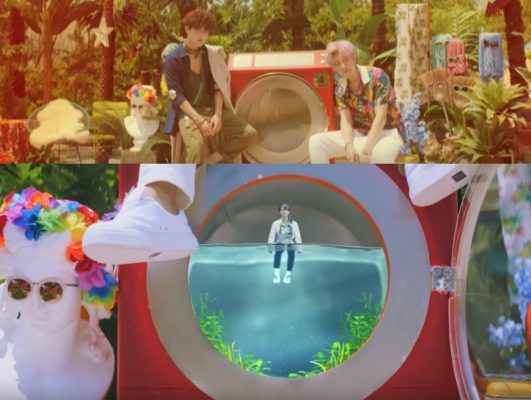 Now I love a good dinner party as much as the next person, but the ones in K-pop music videos tend to be a little… strange. This isn’t always a bad strange: B.A.P’s feast in “Honeymoon” looks rather pleasant, if we don’t stop to wonder why or how the guys lugged this big fancy dining table into the middle of the great outdoors:

G-Dragon’s dinner in “One of a Kind,” however, is slightly more concerning.

EXO’s dining spread in “Monster” looks decent and clean enough, except that the food doesn’t appear to be particularly edible.

Not pictured: the scene later in this MV where this dinner table also gets destroyed.

We would be remiss in not mentioning the dinner trope’s cousin, the mysterious tea party, which features a tea table that pops up out of nowhere, a fact about which no one ever seems to be nearly suspicious enough. But I suppose that when the cakes and drinks look this delicious, it doesn’t matter that Oh My Girl stumbled upon their table in an old abandoned mansion in their “Closer” MV, or that IU found hers after crawling through a closet in the video for “23.” 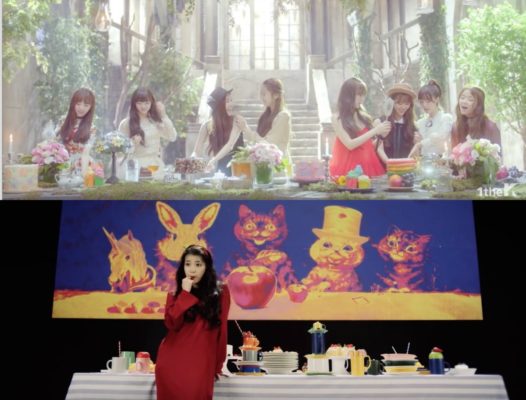 Some people play board games for fun, but idols never seem to be enjoying themselves at all when they play games in MVs, pondering painstakingly over every move as if it’s the most important decision they’ll ever make. The chessboard is likely a metaphor for the game of love, but come on, why so serious? 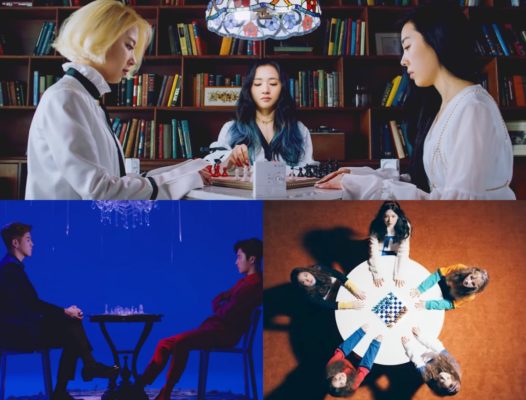 It’s not too surprising that so many MVs include sets with water, given that this makes any choreography look instantly cooler. But at the same time, isn’t it a little funny to think that we’re essentially watching our idols splash around in giant puddles?

Idols may be spending some time in the water in MVs, but the marine mammals that we might expect to find there certainly are not — because for some reason, they are always in the sky instead. Like the airborne dolphins in Chungha’s “Why Don’t You Know”…

The space whale in EXO’s “Sing For You”…

And the flying whale that Younha’s MV for “Run” is centered on:

Well, that’s all of our odd tropes; we hope you had a whale of a good time reading this article! Which weird K-pop trope is your favorite? Can you think of any others? Let us know in the comments!