BTS has given fans another chapter in their “The Most Beautiful Moment in Life” saga with Jungkook’s “The Notes” entry.

“The Most Beautiful Moment in Life” was a previous series of releases by BTS, which spanned over two mini albums of that name and their “Young Forever” compilation album. The storyline about youth, friendship, and hardship introduced through that series has continued to be weaved through BTS’s more recent releases.

Before their latest comeback last September, they continued the story by sharing a diary entry written by Jin’s character. The entry told the story of the events that led up to the car accident that Jungkook’s character was in. Further notes were shared in the group’s latest album “Love Yourself: Her.”

On May 4 at midnight KST, BTS released a new “The Most Beautiful Moment in Life: the Notes” entry, this time from Jungkook’s perspective after the accident.

Read the entry below:

“I thought my body was floating in the air but in no time I was on the hard ground. I didn’t feel anything at all for a while. My whole body just felt unbearably heavy, so I couldn’t even open my eyes. I couldn’t even swallow or breathe. I was losing consciousness and my surroundings gradually became dim.

“Then suddenly, as though shocked by something, my whole body jolted in a spasm. Amidst the pain and thirst that I couldn’t pinpoint, I opened my eyes involuntarily. I could see something flickering beyond my range of vision, with my eyes feeling like they were full of sand. I thought it was a light, but it wasn’t. It was bright, and big, and dim. It didn’t move and hung in the air. After I looked at it for a while, its form gradually became more clear. It was the moon.

“The world was upside down, maybe because my head was bent backwards. In that world, that moon was also hanging upside down. I tried to cough so that I could breathe, but I couldn’t move. Then I felt a chill. I was scared. I moved my lips but no words came out. Even though my eyes weren’t closed, everything was getting dark. In my fading consciousness, someone spoke to me.

“‘Living will be more painful than dying. Do you still want to live?'” 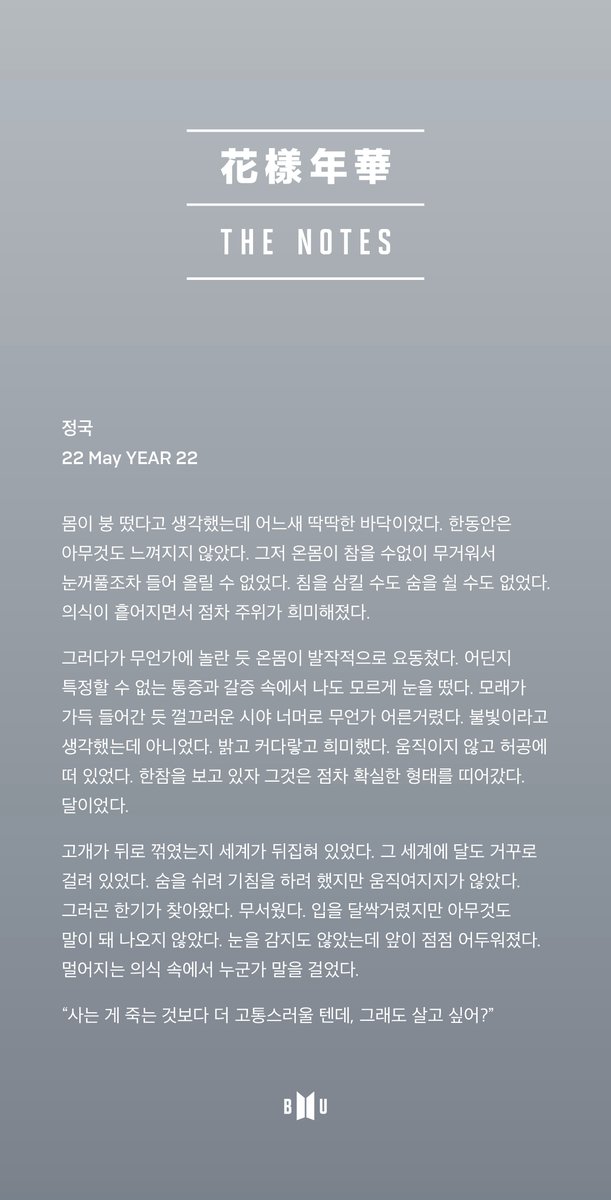 “Love Yourself: Tear” will be released on May 18, and the album has already set a new record for stock pre-orders.

BTS will perform their new track for the first time on television worldwide at the Billboard Music Awards in Las Vegas on May 20, where they’re nominated for the Top Social Artist Award after winning last year. They will also be embarking on a world tour later in the year, and have announced a first set of cities and dates.