Jang Hyuk, Jung Ryeo Won, And Junho Are Confident About Their Chemistry In “Wok Of Love”

The cast of SBS’s “Wok of Love” held a V Live to talk about their drama.

“Wok of Love” is a romantic comedy about chef Seo Poong (played by Junho) who goes from working at a famous hotel restaurant to a neighborhood restaurant owned by loan shark Doo Chil Sung (played by Jang Hyuk). They meet Dan Sae Woo (played by Jung Ryeo Won), a daughter of a rich family who always craves Chinese food.

On May 4, Jang Hyuk, Jung Ryeo Won, and 2PM’s Junho spoke confidently about their teamwork during a live broadcast.

The chemistry between actors is key in a drama and the actors were confident about theirs. Jung Ryeo Won said, “I got my line wrong when acting with Junho, but he went with it and resumed acting. It made me think that we have good chemistry. It’s the same with Jang Hyuk. I met him for the first time, but it felt like we previously worked on our chemistry.”

Junho agreed and laughed. He said, “It was lonely filming alone. The character I’m playing is a character who’s very lonely, but it’s fun when filming with Jang Hyuk and Jung Ryeo Won even if it’s all night.” Keeping his answer short and sweet, Jang Hyuk replied, “Good.”

Writer Seo Sook Hyang is known for the use of catchy phrases in her dramas such as “Pasta” and “Jealousy Incarnate.” Junho said, “Doo Chil Sung’s lines are catchy and fun. There are many lines that look like they may become popular phrases.” 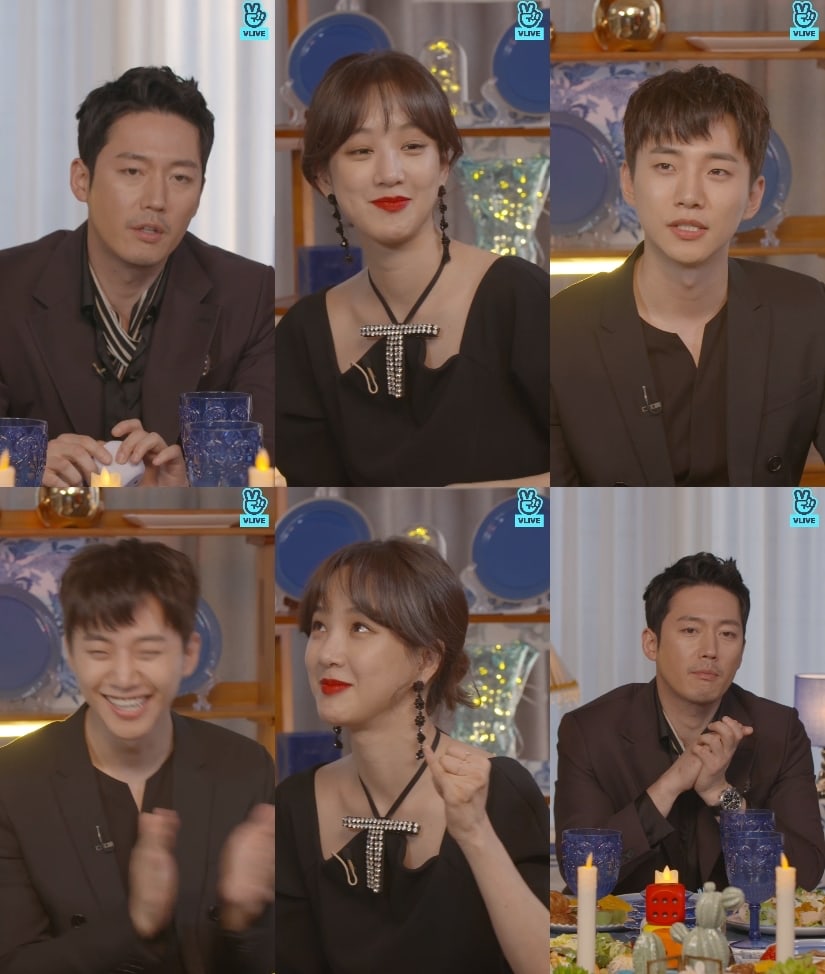 The cast also did a Q&A with viewers. One fan asked if they ate a lot during filming. Junho answered, “I can’t eat freely because of the script. I think my worries will subside after watching the first episode, but I’m sensitive so I can’t do that right now.”

Jang Hyuk was the complete opposite. He responded, “I eat a lot. If I can’t eat a meal, then I eat the prop foods. The prop foods are delicious.” Jung Ryeo Won said, “I don’t eat snacks, but eat meals. At some point, I could feel that I didn’t have energy because I didn’t eat a meal. I try not to miss meal times.”

Jung Ryeo Won and Junho talked about their co-star Jang Hyuk. They said, “Jang Hyuk makes us comfortable, works with us well, and is really fun on set. His character Doo Chil Sung is also really fun.”

Jang Hyuk replied, “I’m actually introverted, but become upbeat when I’m with close friends. I showed that side of me on variety shows and I think people looked at it favorably.” He also showed off his rapping skills when a fan said they bought his CD.

Jang Hyuk and Junho said, “Jung Ryeo Won has a lot of joy and laughs well.” She commented, “To be honest, I have a management company who would fight with me [in that situation], but I get angry and can’t contain my anger if I see that staff don’t get paid.”

“Wok of Love” will premiere on May 7 at 10 p.m. KST and will be available on Viki! In the meantime, check out the trailer with English subtitles below!