Alex Christine, the Grand Prize Winner for Cube and Soompi’s joint talent competition, “Rising Legends: Season 2,” will now be bringing her talents to the “Produce 48” stage! 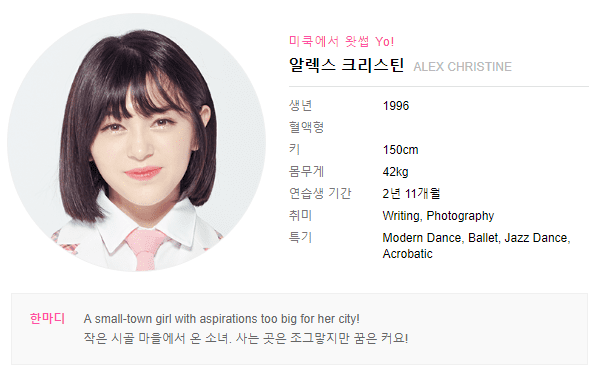 “Rising Legends” is an annual fan-led talent search, presented by Soompi and a leader in the Korean music space. In 2016, Soompi partnered with JYP Entertainment, and last year, Soompi joined forces with Cube Entertainment, to put the spotlight on K-pop star hopefuls. Thousands of entries and nearly one million fan votes from more than 190 countries later, Alex Christine was crowned the “Rising Legends” winner for 2017.

Since then, Alex has visited Korea to experience the journey to K-pop stardom through the Viki Original series “LEGENDARY: Making of a K-Pop Star,” where she received guidance and advice from seniors in the industry, like f(x)’s Amber, UP10TION, and “Produce 101” stars Jang Moon Bok and Seong Hyun Woo. To date, “LEGENDARY: Making of a K-Pop Star,” produced by Soompi in conjunction with ZANYBROS, has reached over 3.4 million views across all platforms, and spawned Alex’s first music video, “Strike It Up.”

Alex Christine’s dream of K-pop stardom will continue as one of the 96 trainees in “Produce 48,” competing under the ZANYBROS music label, ZB Label.

Check out the contestants for “Produce 48” here.

Soompi Spotlight
Rising Legends
LEGENDARY: Making Of A K-pop Star
Produce 48
Alex Christine
How does this article make you feel?