On the first episode of JTBC’s “Idol Room,” the younger sister of Wanna One’s Yoon Ji Sung made everyone laugh through a hilarious phone call!

Wanna One appeared as the first guests on JTBC’s new variety show on May 12. During the segment “Fact Check,” Yoon Ji Sung agreed with the statement, “My younger sister is 80 percent responsible for my popularity.” He explained, “Whenever my younger sister appears on TV, it becomes a trending issue. In her own words, she says she’s a ‘semi-celebrity.'”

MCs Jung Hyung Don and Defconn asked him if she wants to become a celebrity, and Yoon Ji Sung answered, “She quit her job and is preparing to become a show host.”

Jung Hyung Don joked, “There are rumors that your younger sister is going to be on ‘Produce 48,'” and Yoon Ji Sung laughed in reply, “That’s something even I didn’t know about.”

Wanna One’s Kang Daniel also vouched for her sense of humor and said, “She is about three times a threat to Yoon Ji Sung’s job. She’s someone with energy.” 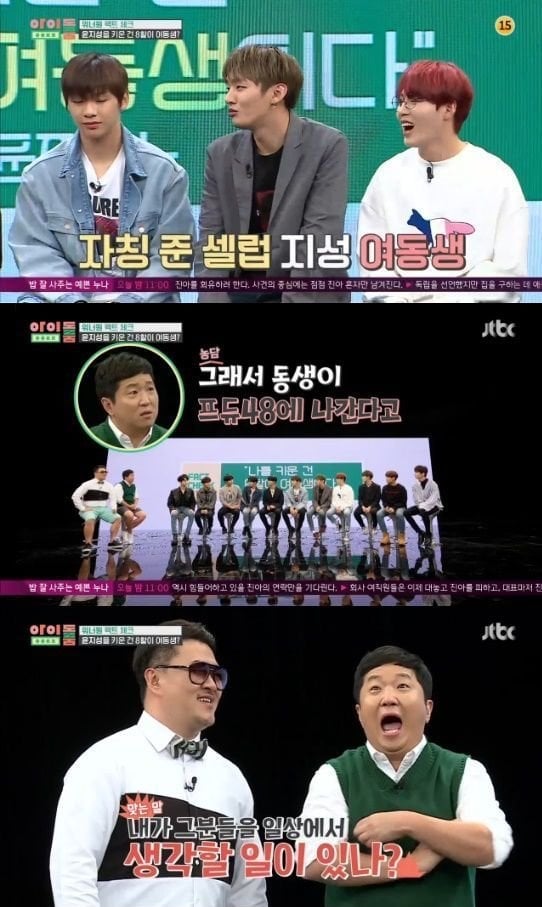 Yoon Ji Sung proceeded to call his younger sister on his cell phone without telling her that they were currently in the middle of filming. He asked, “What did you usually think of Jung Hyung Don and Defconn?” She answered, “Do I have any reason to think about them during my daily life?”

The MCs then told her that they were currently filming for the program. In her “TV voice,” she greeted the MCs and said, “Should I say my greeting? Hello. I am Wannable Yoon Seul Gi.” She then joked that she was responsible for 90 percent of Yoon Ji Sung’s popularity.

When Defconn jokingly said, “There’s a rumor that you may appear on this season of ‘Produce,'” she reacted with no surprise as she replied deadpan, “Oh, word has already gotten out?”

She added, “Please create the path for me to become a celebrity.”

Wanna One
Yoon Ji Sung
Idol Room
How does this article make you feel?