BTS Talks About “Fake Love”, Fan Song, And More Ahead Of “Love Yourself: Tear” Comeback

BTS teased fans and raised anticipation for their upcoming album “Love Yourself: Tear” through a special comeback show on Naver’s V Live on May 18! Despite their packed schedule in Los Angeles, BTS took time to connect with fans and share stories from their comeback preparations in the special broadcast.

The members first expressed their gratitude to leader RM for being a key figure in ensuring that they created an album they could be proud of. They stated, “RM had a hand in the entire album creation process. We even saw him stay up all night writing lyrics for V. He was so excited and was saying to himself, ‘I’m sure V is going to like this.'” 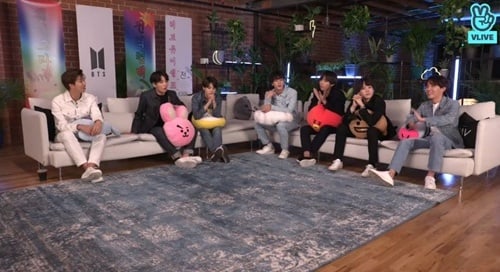 BTS then opened up about their title track “Fake Love.” When asked to describe the song, Jimin explained it as, “To put it simply, if ‘Blood Sweat & Tears’ was an expression of pitiful sorrow, then ‘Fake Love’ puts an even more heartbreaking twist on that emotion.” RM agreed and stated, “That’s a great explanation. It’s a continuation of that sorrow, but with a slight difference.”

The members also shared how they reacted to their new title track. Jimin said, “I usually don’t lavish praise on our own songs, but this song is really good.” Suga added, “To be honest, we’re usually unsure when we hear our title tracks because we worry a lot about our comebacks, but we didn’t feel that with this song. As soon as we heard it, we all said, ‘This is it, it’s good.” When asked which member they’re excited for in this album, the members chose Jin and V explained, “I think people should keep an eye on Jin because he has a lot of important parts,” and J-Hope added, “Jin really is the main character in this comeback.” 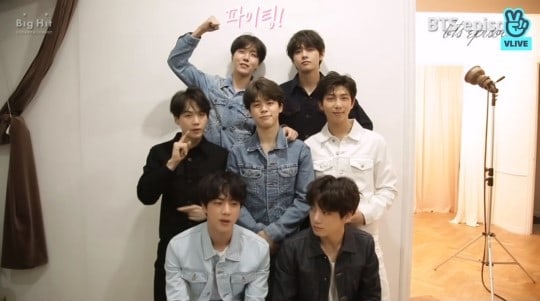 BTS also talked about a special track on their album that’s dedicated to their fans, titled “Magic Shop.” Jimin said, “Jungkook participated in the producing of ‘Magic Shop’ and he really worked hard on it. I’m really excited for people to hear it.” Jungkook showed affection for the track as he explained, “Because it’s a song dedicated to our fans, it didn’t feel like work when we were producing that song. I was just thinking about our love for ARMYs [BTS’s official fan club name].” V added, “The song is based on something RM said at a concert. I hope our fans will be excited to hear it.”

Finally, BTS gave their thoughts on their upcoming comeback. RM expressed his excitement as he said, “The day has finally come. There isn’t much time left till we put on our first performance. We were wondering when this day would come, and it’s finally here.” J-Hope stated, “It would be a lie to say that we don’t feel any pressure, but we’re confident about what we’ve got. Our confidence comes from the love we receive from ARMYs. It’s a great album, so I hope people are excited for it.”

BTS will be making their long-awaited comeback with “Love Yourself: Tear” on May 18, and they will hold their comeback stage on May 20 at the Billboard Music Awards.