“The Undateables” is a romantic comedy about Hoon Nam (played by Namgoong Min), who rejects love, and Jung Eum (played by Hwang Jung Eum), who dreams of falling in love but gives up on it because of the harsh realities that she faces.

In the released stills, Namgoong Min is in sportswear with headphones in his ears. He doesn’t look like he’s prepared for swimming in the water anytime soon. In the drama, his character Hoon Nam will enter the Han River unexpectedly because someone pushes him from behind. The main points to keep an eye on are who pushed Hoon Nam into the Han River and how he will find his way out of the water.

During the filming of this scene, Namgoong Min showed his professional side. Before filming, he thoroughly checked his locations and took a careful approach to the drama shooting. He didn’t hesitate to repeatedly go in and out of the Han River.

Once the filming was completed, Namgoong Min checked the monitor in satisfaction and smiled, and the staff admired him for his professional appearance. 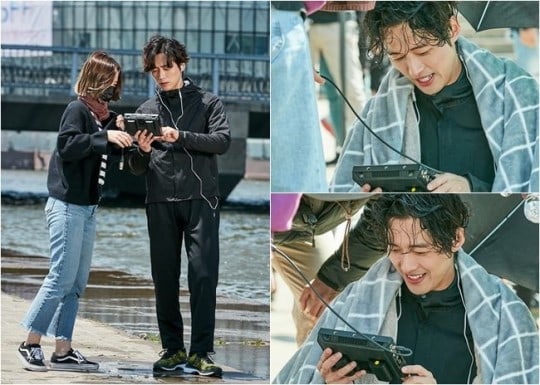 The production crew praised him, saying, “Although Namgoong Min had to film several times in high water level and a high current, he did not hesitate to enter the cold water at all. Thanks to his passion, we were able to safely end the filming.”

“The Undateables: will air its first episode on May 23 and will be available on Viki. If you haven’t already, watch the latest trailer below!

Namgoong Min
The Undateables
How does this article make you feel?