ASTRO’s Cha Eun Woo showed his impressive language skills recently when he easily conversed in English while in Germany.

On the May 25 episode of MBC’s “Guys Who Cross The Line” (literal translation), the cast members spent the day visiting historical sites in Berlin.

ASTRO’s Cha Eun Woo, Seol Min Suk, Kim Gura, Lee Si Young, and Yoo Byung Jae first visited the Berlin Wall, and took in the site that symbolized reunification. Looking at one of the former guard posts that became a tourist spot, Seol Min Suk shared, “I hope that one day our Panmunjum [the Joint Security Area between North Korea and South Korea] will also become a tourist spot.”

The group then visited a former bunker that had been turned into a contemporary art museum. The curator explained the work in the exhibitions in English, and as Cha Eun Woo was the only person who could understand English, he translated for the rest of the group. Whenever they were curious about something, they asked Cha Eun Woo, who conveyed their questions to the curator. 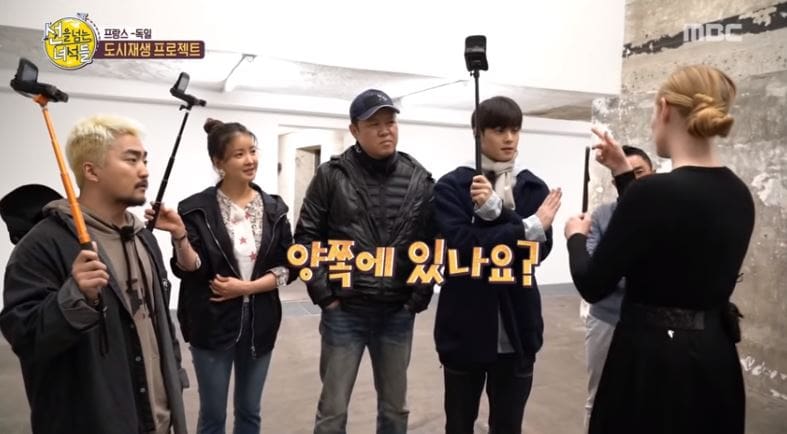 The cast members praised the ASTRO member for his English-speaking skills. Lee Si Young commented, “I thought you were a ‘face genius,’ but you’re an actual genius too.” He humbly explained that he hadn’t understood everything, but the other members continued to praise him. Seol Min Suk then asked him, “Have you every studied abroad? Or are your English skills something you learned in high school?” Cha Eun Woo answered that he had only learnt English in school. Lee Si Young made everyone laugh when she wistfully commented, “We went to high school too…”

Cha Eun Woo later shared that he had never gone clubbing before, as they talked about the fact that Berlin was famous for its nightclubs. Yoo Byung Jae told him, “If I had your face, I would go every day.” The two then went to experience German nightlife, but they returned after 30 minutes. Yoo Byung Jae explained, “It’s so dark that even Cha Eun Woo’s face doesn’t help,” while Cha Eun Woo commented, “I think calm music suits me more.”