Go Ji Yong will be removed from SECHSKIES’s official profiles.

On May 28, YG Entertainment announced, “Due to the requests of fans, we will officially request for the modification of profiles on all portal sites.” The agency added, “It has been two years since SECHSKIES has reunited. The probability of Go Ji Yong joining in the future is low, so we have decided to follow [fans’] requests.”

Earlier in the day, a SECHSKIES fan union released a statement requesting for Go Ji Yong’s name to be removed from SECHSKIES’s profiles on sites like Naver and Daum.

The SECHSKIES fan union presented four main points in the statement, all related to the advertising company he works at.

The first point mentions that fans were approached to take part in promotional events through their attendance, social media marketing, and monetary support. For one event that was mentioned as being similar to a fan meeting, more than 1000 fans participated and were asked to act like regular attendees. His coworker reportedly made insulting remarks to many fans and was not restrained by Go Ji Yong. The group photo taken at the event, with fans disguised as regular attendees, was used as a promotional image to showcase the company’s performance.

The second point shares that the company recruited investors by promoting the “fandom power” that Go Ji Yong holds as having been a SECHSKIES member, and the third point says that the company and business partners used “SECHSKIES” as a hashtag to promote various items on social media.

In the final point, the union reveals that fans messaged Go Ji Yong in June 2017 to ask him to remove his name from SECHSKIES profiles and SECHSKIES from his profile, and he reportedly responded by having all the promotional posts deleted. Afterwards, his company began using similar marketing with Chinese fans, and the union is concerned about this expanding to even more SECHSKIES fans around the world.

The statement concludes, “There is not a single active group in the country that has a former member included in the profile, and there are also no other circumstances of the group name being stolen for personal business. We hope that YG Entertainment will modify the profile as soon as possible and protect the trademark of ‘SECHSKIES.'” 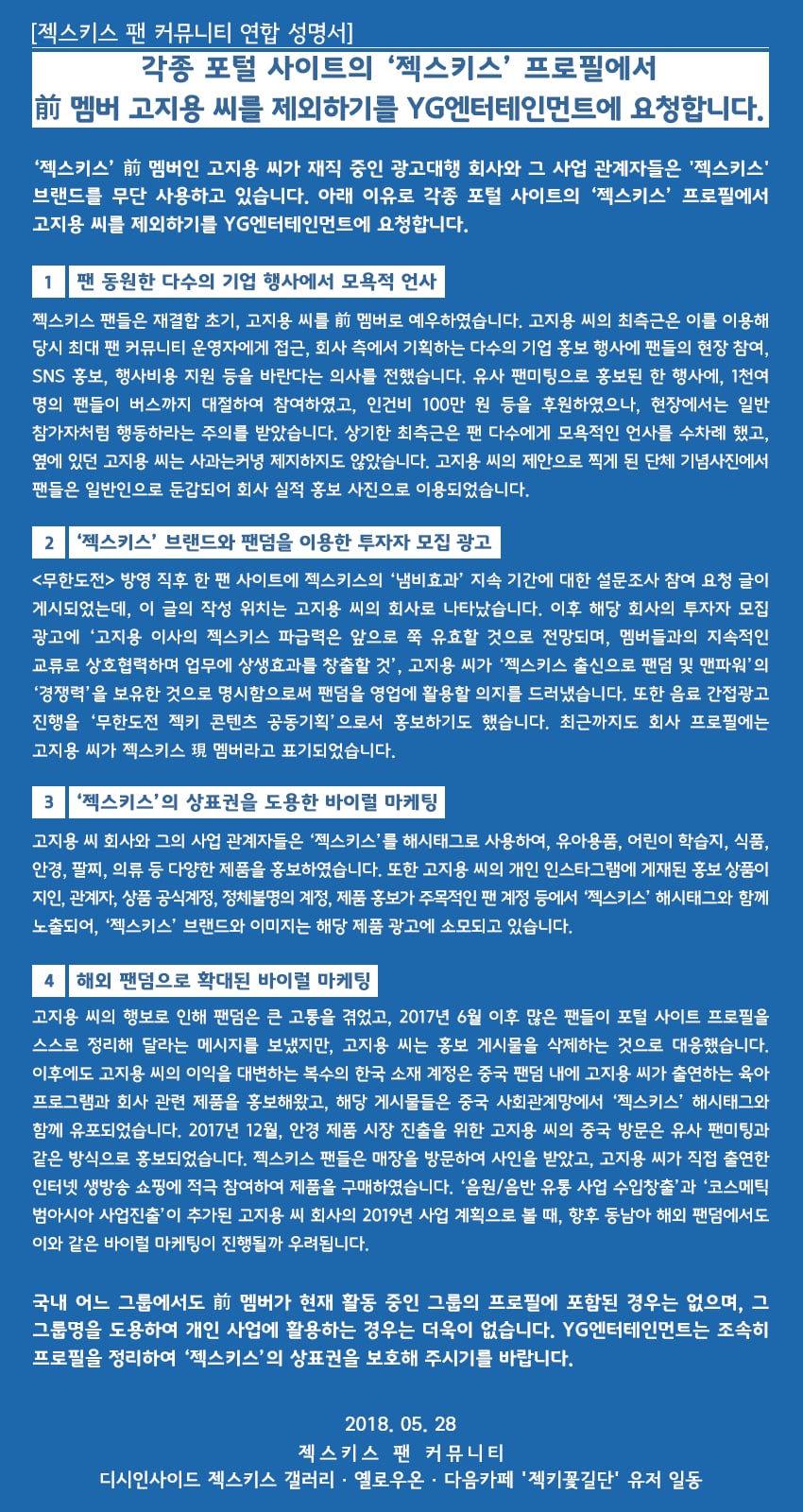 SECHSKIES
YG Entertainment
Go Ji Yong
How does this article make you feel?