Upcoming tvN Wednesday-Thursday drama “Familiar Wife” is already gearing up to be a great drama as the cast recently had their first script reading!

“Familiar Wife” will be a fateful love story that shows how one decision can change everything about the future, and puts an interesting and relatable spin on a concept that everyone has thought about at least once in their lives. The first script reading for the drama took place earlier this month and was attended by producing director (PD) Lee Sang Yeob and screenwriter Yang Hui Seung, as well as cast members Ji Sung, Han Ji Min, Jang Seung Jo, Kang Han Na, Son Jong Hak, Park Won Sang, Park Hee Bon, VIXX’s N, Kim Soo Jin, Kim So Ra, Gong Min Jung, and others. 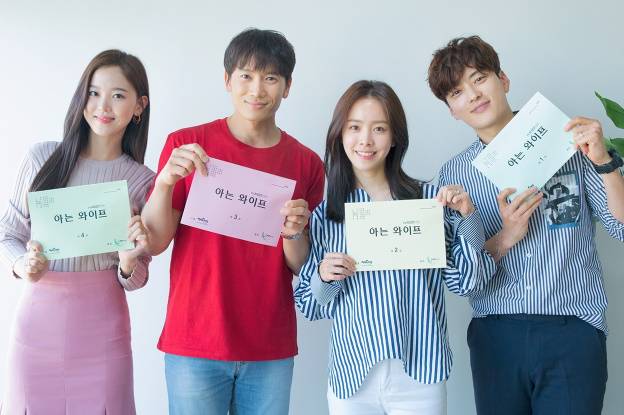 Ahead of the script reading, PD Lee Sang Yeob expressed his trust in the cast as he stated, “I think this will be a bright and fun drama, and I’m excited.” Screenwriter Yang Hui Seung added, “I hope the process of making this drama will be a fun and happy memory for all of us. I will do my best to make it a drama where the people really shine.”

The atmosphere was full of laughter and energy as the cast began working together. Ji Sung and Han Ji Min enthralled everyone as Cha Joo Hyuk and Seo Woo Jin with their chemistry from the beginning as a married couple who seem to have entered a state of ennui in their marriage. Their constant bickering and ad-libs had everyone laughing along as they embodied their characters. They were joined by Jang Seung Jo, who plays Cha Joo Hyuk’s friend and colleague Yoon Jong Hoo, and Kang Han Na as Lee Hae Won, Cho Joo Hyuk’s first love. 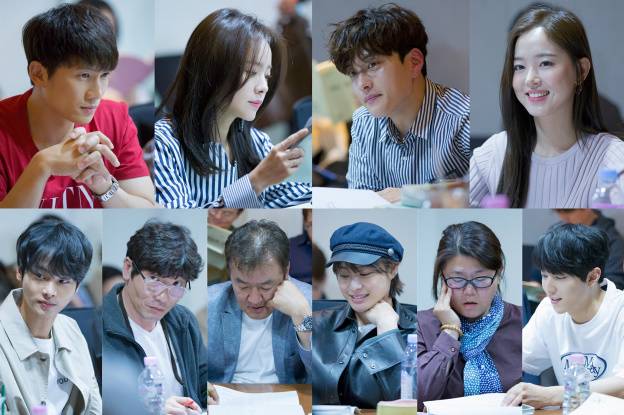 Much of the drama will take place in the bank Cha Joo Hyuk works in, and he will be surrounded by a talented cast who will breathe life into the project. From VIXX’s N playing the talented but individualistic Kim Hwan to Son Jong Hak’s clueless branch manager Cha Bong Hui and Gong Min Jung playing bank employee Choi Hye Jung, the cast worked well together to create a lively scene.

The “Familiar Wife” production staff stated, “We have a great cast of actors who know how to bring their characters to life, so it was a fun and engaging script reading. Ji Sung and Han Ji Min showcased a chemistry that was beyond what we could have hoped for, and we believe they will create a great story together.”

“Familiar Wife” will be the follow-up drama to “What’s Wrong with Secretary Kim?” and will premiere in August.