Girls’ Generation’s Hyoyeon opened up about some of her past concerns and frustrations on JTBC4’s “Secret Sister.”

“Secret Sister” is a reality show where female celebrities get to know each other better by spending time together and sleeping in the same bed. They open up about their concerns as women who work in the entertainment industry.

After drinking together at Han River and getting rid of the awkwardness between them, Hyoyeon and MAMAMOO’s Wheein continued the second round of drinks and talks in their room.

Hyoyeon turned on MAMAMOO and Girls’ Generation’s debut MVs and they spoke about the beginning of their careers.

Wheein began to talk about how because of the pressure to succeed, her debut wasn’t a time of celebration. She said, “We had to constantly think about doing better the next day, so we couldn’t feel any happiness that we debuted. It was more along the lines of ‘We did it. We have to do better tomorrow.'”

Hyoyeon said, “My trainee years were really long, so I dreamed a lot about my debut. Because of that, I cried a lot after my first debut [stage].”

She continued, “Because of the big picture of the agency and since YoonA is pretty and tall, she became the center. Every person had their own role and position. Before my debut, I thought I was the best, so at the time, it was difficult for me to accept that I wasn’t the center.” 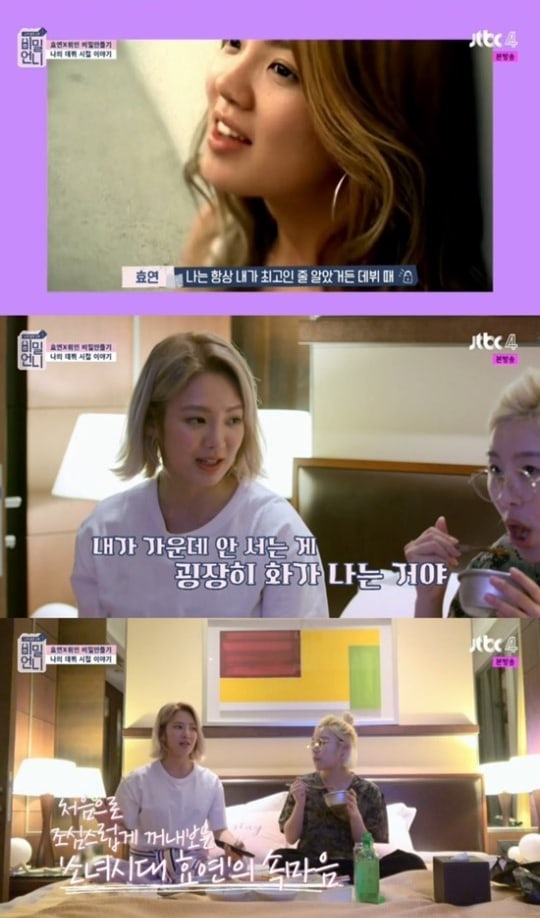 She added, “Because of that, it was really difficult, but I thought that someday, people will see me even when I’m standing on the side.”

The Girls’ Generation member opened up about the difficult times of not being acknowledged for her efforts or skills, and how she even thought about going on a different path. She said, “In the middle, I thought, I should give up. If I’m going to do something else, I should quickly give this up and start going on that path since it takes time to learn something new. Nothing goes well the first time. But I couldn’t quickly give this up.”

“Riding the bike around Han River helped me relieve a lot of stress,” said Hyoyeon.

Girls' Generation
Hyoyeon
Secret Sister
How does this article make you feel?