Early morning KST on June 2, the singer confirmed that he started Twitter by posting an amusing Instagram post that asked if anyone would be willing to tell him how to use it. The photo he shared is a screenshot that shows his Twitter account handle and his now-deleted first tweet that says, “How do you use this..?”

Baekhyun expressed his thoughts on his brand-new account as he figured out how to use Twitter. He wrote, “This…Do you just have to write like this? Hi hi!? I think I get the gist of it now! My ID was something weird at first…is it still like that? I changed it though.. So, is there a way you can read replies here? Oh, you just have to click this!”

The EXO member then posted a proper greeting, saying, “Pleased to see everyone!!” before he continued to share his thought process as he discovered how to turn off notifications.

Although it has only been about half an hour (at the time of this article) since he announced he created a Twitter account, Baekhyun has already surpassed 154,000 followers and the count continues to grow by the second. He is notably the first EXO member to create a Twitter account. Fans also showed their delight as they trended “WelcomeToTwitterBaekhyun” worldwide. 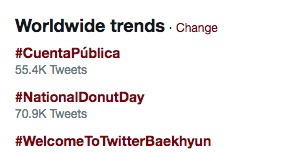 EXO is currently in Hong Kong for the next leg of their ongoing fourth concert tour “EXO PLANET #4 – The EℓyXiOn” on June 2-3.