Looking For An Atypical Period Drama? Here Are 7 Reasons “Oh My General” Is Worth The Watch

As “Oh My General” is a historical C-drama, you’re probably thinking that you’re diving into a typical period rom-com, albeit with a female lead who knows how to fight pretty well and won’t wait around to be rescued, right?

Well prepare to be wowed, because “Oh My General” is definitely beyond expectations. This startling period romance features a no-nonsense female general named Ye Zhao (Sandra Ma), who has lived her entire life as a man. She is granted the hand of a spoiled, weak, and fragile prince named Zhao Yu Jin (Peter Sheng), who is known far and wide as a master of hedonism. The rest, as they say, is history. Needless to say, this is not your typical period drama (or romance), and the heroine is no shrinking violet of a well-bred lady.

So buckle up and get ready, here are a few reasons you should watch “Oh My General.”

“Oh My General” is a very, very good surprise. You can tell just from the leads. Zhao Yu Jin is a male protagonist who keeps using more typically feminine poses, gets called “granddaughter-in-law,” and enjoys tasks that would fall to the Lady of the house. On the flip side, Ye Zhao refers to herself as a man, has obvious identity issues, decorates her room with toys of the lethal kind, and claims on multiple occasions that she loves to be surrounded by beautiful women. It challenges traditional gender roles like you wouldn’t believe, which makes it all the more refreshing to watch.

A truly badass woman with an equally badass husband

Ye Zhao is a general of the highest rank and a capable fighter who earns her position and the respect of her men on her own merit. She doesn’t rely on her husband for rank or prestige or anything of the like, which is pretty badass. What’s even better is that Zhao Yujin is also badass in his own way. While he has the backing of the king thanks to his birth, he’s also intelligent, resourceful, and cultured. He may be very different from his wife, but he has his very own set of skills. What’s best about these two is that they’re complementary, and more than that, they’re equals.

The OTP is real

The chemistry between Ye Zhao and Zhao Yujin is insane, and the slowly building relationship between their characters is full of fun and tenderness that will never fail to make you smile. Yujin’s childish kindness, which one might almost call it purity; Ye Zhao’s fond, cheeky smile; and the way they clearly work so very well together once they start cooperating is a marvel to watch.

And don’t even get me started on the countless moments of squeal-worthy sweetness between them and how in tune they are to each other. Dancing without music in the privacy of their own rooms? Check. Hands sliding gently against each other? Check. Girl dipping boy? Double check. Yes, you read that right. “Oh My General” has everything you wish your OTP would do.

Given that the female lead is a general of the army who has been on the front lines for years — whose weapon of choice is not so boring as a simple sword, if you please — it’d be weird if she couldn’t fight. The fight scenes are definitely up to par, beautifully choreographed, and you can tell that special attention was given to the way that they look through not only the action itself, but the colors and surroundings, too.

You gotta love a man who can both fight and whisper poems (sometimes at the same time) like it’s second nature. It’s impossible not to appreciate the gorgeous, gorgeous poems the characters recite from time to time, quoting lines at each other in the middle of a conversation, and the heart that goes into those words.

It doesn’t take itself seriously

It’s easy, after watching a lot of period dramas, to get used to characters that are frowning aaall the time. They frown when they sleep, eat breakfast, sit down to talk of serious matters with even more serious voices, when they walk, ride and fight, and even when they bathe.

On the flip side, life actually seems enjoyable in “Oh My General,” which is nice for a change. These characters smile, giggle and squeal (yes, the men, too). They tease each other, throw playful nicknames in each other’s face, and generally feel happy and well-adjusted. Some scenes are purposefully cheesy and so clearly overdone that it can only be intentional. 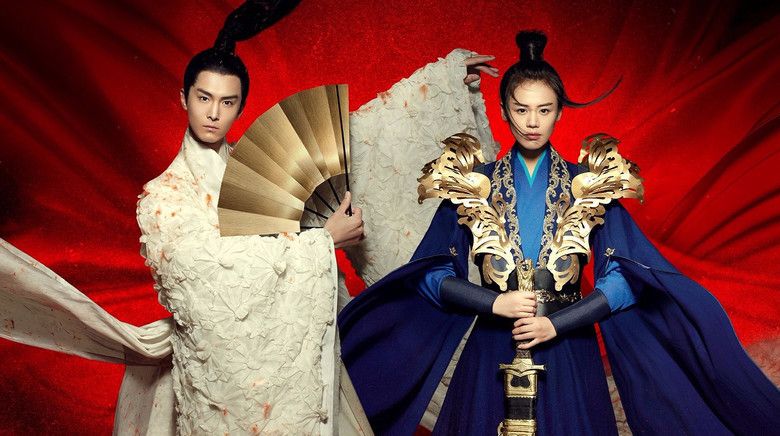 With a swoon-worthy romance, hilarious situations that will have you bent over laughing, a stunning opening theme, beautiful costumes, and good secondary characters, “Oh My General” makes for a wonderful surprise of a delightful, atypical period romance. Fun and light-hearted, you will definitely enjoy it if you’re looking for something cute, quirky, and funny to take a break between more “serious” dramas.

Are you convinced? Were you watching “Oh My General” already? Let us know in the comments!

Soompi Spotlight
Peter Sheng
Oh My General
Sandra Ma
How does this article make you feel?