Watch: AOA’s Seolhyun Wows Everyone With Her Listening Skills On “Amazing Saturday”

AOA’s Seolhyun impressed the cast of tvN’s “Amazing Saturday” with her ability to correctly guess lyrics.

On the June 2 episode, the cast listened to K-pop songs and tried to guess its lyrics during the segment “Do Re Mi Market.” AOA members Seolhyun and Hyejeong appeared as guests and tried to help the cast correctly guess the lyrics in order to win delicious food as their reward.

MC Boom played MOBB (subunit with WINNER’s Song Mino and iKON’s Bobby)’s “Hit Me” and the cast perked up their ears to listen to the lyrics. The members had trouble hearing the words and Seolhyun came to the rescue with her excellent hearing.

They had to watch mukbang star Haetnim devour what would’ve been their reward. Seolhyun confessed that she’s a fan of the mukbang star after being introduced to the videos via her manager.

In the second round, Seolhyun suggested that they change the answer from “phone” to “call.” The other members did not pay attention to her at first, but were shocked when it was later revealed as the answer. Thanks to Seolhyun, everyone enjoyed boiled duck with rice and mushrooms. 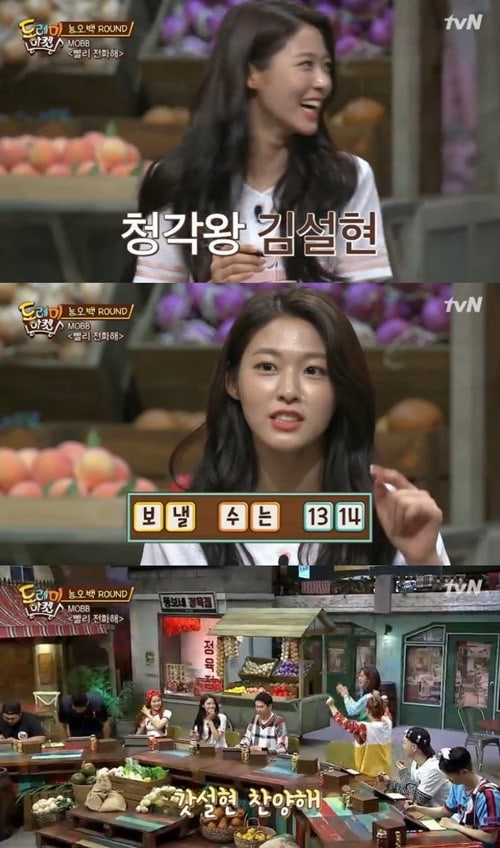 For the individual round, each person had to correctly guess the food in the close-up photo. Park Na Rae, SHINee’s Key, Hanhae, Girl’s Day’s Hyeri, Shin Dong Yup, Kim Dong Hyun, Hyejeong, and Seolhyun all got it correct, while Moon Se Yoon was the only one who guessed incorrectly.

The final song of the night was Cool’s “This Summer” (literal title). Thanks to Shin Dong Yup and Park Na Rae, the cast had a smooth start and answered the question with ease.

However, the members began to voice different opinions about the answer and still weren’t sure after listening to the final hint. In the end, their final answer was correct and they were finally able to enjoy chicken and beer.

“Amazing Saturday” airs on Saturdays at 7:40 p.m. KST. Check out the clips below!

AOA
Seolhyun
Amazing Saturday
How does this article make you feel?