AOA had some words to say to their former selves on JTBC’s “Idol Room”!

On the June 2 episode, all six members of AOA appeared on the show.

As the episode drew to a close, the MCs surprised them with a “welcome back gift” which were photos of the members from the year of their debut in 2012.

At first, the AOA members were surprised by their photos, then walked closer to stand in front of them.

Some members reenacted their pose in the photos, while others expressed their embarrassment.

Four of the members then sent video messages to their former selves.

Mina said, “Mina, you’re holding an instrument prettily in the photo. It’ll be good for you to not hold the instrument. How about working on dancing better and developing your sexiness a bit more? Thankfully, I don’t think you become uglier as time goes on. You’ll look better than the past, but you won’t drastically improve, so don’t worry.” 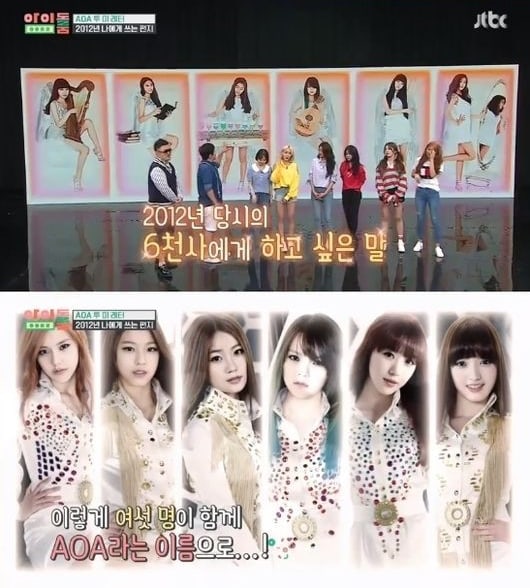 Chanmi said, “Dear Chanmi. Your appearance will go through a transition period. Really. Don’t run away. There will be a moment when you want to run away. Listen to the other members and pull yourself together. If you endure it, there will be a day when the sun rises, so I hope you can endure it well.”

Yuna stated, “You’re going to be really busy. AOA is going to turn out well, so don’t get tired, and I hope you’ll always have strength.”

AOA released the MV for their latest title track “Bingle Bangle” on May 28.

AOA
Idol Room
How does this article make you feel?