On the June 3 episode of SBS’s “My Ugly Duckling,” Seungri and Park Soo Hong spent time talking honestly about themselves in Bali.

After the two enjoyed a pool party, they went to have dinner together. Park Soo Hong was impressed by the fancy dinner and said to Seungri, “You’re really a celebrity.” Seungri replied, “If you’re having fun, I’m also having fun. You know Yang Hyun Suk, he was born in 1969. You don’t look like you were born in 1970. You look so much younger.”

Park Soo Hong then suggested, “I’ll take care of the money and the time, let’s hang out together.” Seungri agreed, saying, “Do you have a friend who’s my age? The trend is to have friends of all ages.”

After Park Soo Hong complimented Seungri that he had a lot to learn from him despite Seungri’s younger age, the two began to share honest stories about themselves. When Seungri asked Park Soo Hong what he got from his five years of clubbing, Park Soo Hong answered, “Fleeting relationships.” 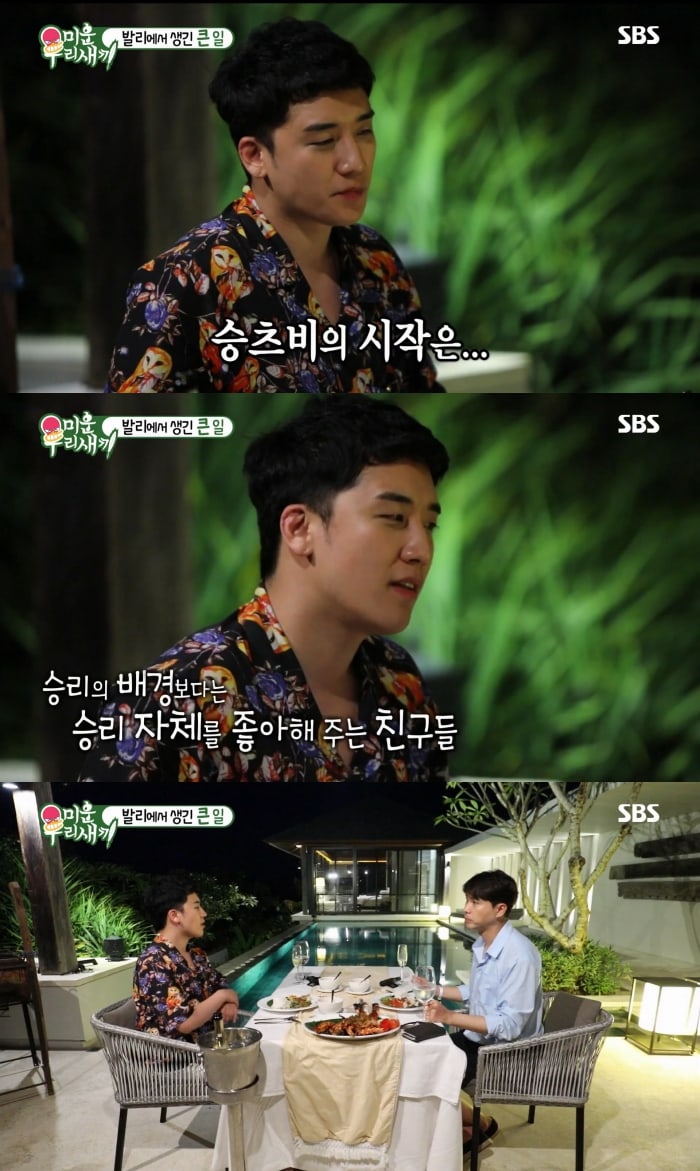 Seungri revealed why he enjoys spending time with friends he made outside of Korea. He began, “Things like enjoying parties abroad and being with friends from abroad, I think it all began when BIGBANG started going on world tours.”

“Actually, they’re all my friends, but these friends don’t know how famous I am,” Seungri continued. “They just think I have a lot of followers on social media. They don’t even know how I got famous; they’re simply not interested. They’re busy living their own lives and enjoying themselves. While doing so they met me, and they liked how this person called Seungri has good energy, how he’s fun to be with. That’s all.”

Seungri concluded, “So when I’m with my foreign friends like this, I really feel free. I feel like I can sense myself becoming free.”

“My Ugly Duckling” airs every Sunday at 9:05 p.m. KST. Check out the latest episode below!

BIGBANG
Park Soo Hong
Seungri
My Ugly Duckling
How does this article make you feel?