HaHa and Kim Jong Kook attempted to cast Wanna One’s Kang Daniel as the lead of their drama on “Big Picture 2”!

On the June 4 episode, HaHa and Kim Jong Kook attempted to fulfill their season two goal by trying to sign an actor as the main lead of their drama “Seoul Institute of Arts Class of 1990” (literal title).

Commenting on the candidates they had previously named, producing director (PD) Yeo Woon Hyuk said, “Song Joong Ki, Park Bo Gum — they’re all good but they don’t match with the character. It needs to be someone younger.”

They then invited the manager of Wanna One member Kang Daniel’s agency MMO Entertainment onto the show. The manager praised Kang Daniel’s hard work and focus on his career.

Expressing his love for Kang Daniel, HaHa said, “I adore you so much. Kang Daniel, I really really ‘save you in my heart.’ You get free pork belly forever.” Kim Jong Kook added, “Daniel! I ‘save’ you in a good way. You tell me if anyone says anything to you.”

Kim Jong Kook and HaHa then pitched the drama to the manager in order to cast Kang Daniel as their lead. They explained that the drama takes place at the Seoul Institute of Arts which produced many stars in the 90s. Kang Daniel will be playing a fictional character, alongside two main characters and real alumni Ahn Jae Wook and Shin Dong Yup.

The manager said that Kang Daniel has not yet received any acting training, but has interest in learning it in the future. Undeterred, HaHa and Kim Jong Kook said that many people these days learn as they go especially if they have talent, which Kang Daniel has.

Kim Jong Kook continued to try to persuade the manager. He said that the “Reply” series was popular because of nostalgia and familiarity, which “Seoul Institute of Arts Class of 1990” has, since it’s a drama about real celebrities.

Just then, Kim Jong Kook’s manager caused a stir on set when he revealed that Jo In Sung and other actors around him enjoy watching “Big Picture.”

After turning to the camera and asking Jo In Sung to appear on the show, HaHa said, “Jo In Sung and Song Joong Ki showed interest, but we’ll boldly turn them down. We’ll give the first chance to Kang Daniel.” 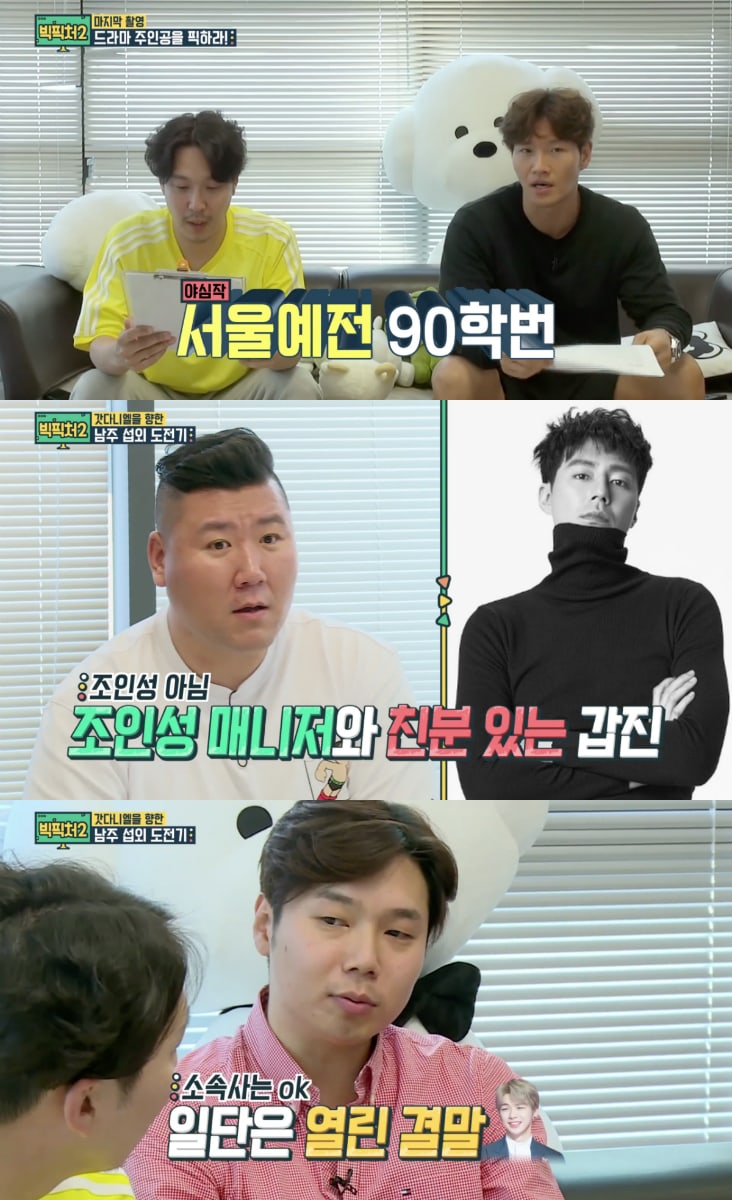 Kim Jong Kook and HaHa continued, “Kang Daniel is popular now, but after he starts acting, we can’t imagine how popularity he’ll be. We’re creating that opportunity for him.”

They continued to make everyone laugh with their efforts. HaHa added, “If Kang Daniel does appear on it, we’ll also give him the chance to sing the OST for ‘Seoul Institute of Arts Class of 1990.’ At this point, I’m basically Santa Claus.”

The manager said, “I think it’ll be fun. We won’t stop him from doing something he wants to do. So if he wants to do it, then we don’t really have a reason for him not to do it either.”

“Big Picture 2” will come to an end this week. Viewers can find out about Kang Daniel’s decision when “Big Picture 3” airs sometime in the future.