Son Ye Jin shared her thoughts on JTBC’s “Pretty Noona Who Buys Me Food” in a recent interview.

Many viewers tuned in to watch Yoon Jin Ah (played by Seo Ye Jin) and Seo Jun Hee (played by Jung Hae In) falling in love as well as the realistic life story of a woman in her 30s.

At various press conferences, Son Ye Jin often said, “I’m sad that it’s ending” when commenting on filming the drama. Her answer remained the same in interviews after the drama ended.

She began, “I have so many emotions. It was a story about a woman my age, love, family, career, and life. It made me think a lot from all perspectives. Dramas are usually very hard to film because of how hard it is on set, so you usually think about quickly filming it and resting. However, I’m surprised that I still have energy. I really liked my first project with director Ahn Pan Seok.”

The drama was loved by not just the actors, but also the viewers. According to Nielsen Korea, it achieved its highest viewership ratings of 7.3 percent and the cast members attracted a lot of buzz.

About the drama’s popularity, Son Ye Jin said, “We didn’t say great phrases or kiss beautifully at cool places like other dramas or movies.”

She continued, “It was a realistic melodrama about everyday life. We showed how couples kiss, talk, and look when they’re really in love. We wanted to depict ordinary love that wasn’t special. Many people said, ‘I was like that too’ and ‘I want to date too.'”

During the second half of the story, the couple could not withstand opposition from Yoon Jin Ah’s parents and broke up. Son Ye Jin commented, “Yoon Jin Ah is an immature character.” 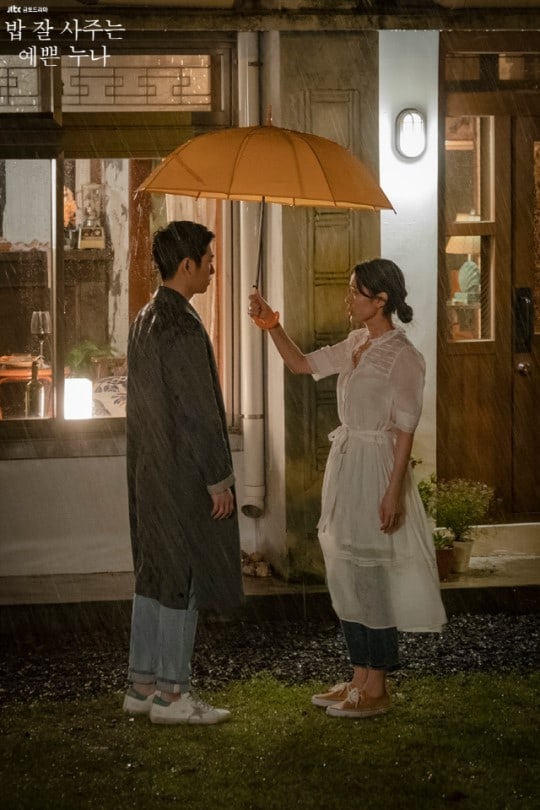 She explained, “I thought, ‘Why would Yoon Jin Ah make this kind of decision? It would be good if she spoke honestly.’ However, Yoon Jin Ah is a really kind person. She’s not the type of person who just tells the other person what she wants. She may have hurt others in the process, but it was Yoon Jin Ah’s way of making a decision that wouldn’t harm anyone. There wasn’t much of Yoon Jin Ah telling her own story during the 16 episodes. That was really sad.”

“Pretty Noona Who Buys Me Food” was a drama about growth. It didn’t just tell the story of a man and a woman, but also explored the changes of a parent and child, boss and employee, friends, and friendship.

Son Ye Jin commented, “The drama ended before [the characters] fully developed. It’s so that we can feel for them and grow by watching these sides of them.”

On a possible second season for the drama, she said, “I also said that, that people will be really curious about how they live after watching all 16 episodes. Will Yoon Jin Ah and Seo Jun Hee have married? If they did, then how will Kim Mi Yeon (played by Kil Hae Yeon) see Seo Jun Hee again? What kind of sister-in-law will Seo Kyung Sun (played by Jang So Yeon) be?”

She added, “I was curious about all of the characters’ futures. If we were to do it again, I said that it’d be nice to start by getting married and having kids. That’s how I feel, but I don’t know if there will actually be a script that comes out.”

Son Ye Jin
Pretty Noona Who Buys Me Food
How does this article make you feel?