The actress recently sat down for an interview with her film “Deja Vu” co-stars Lee Chun Hee and Lee Kyu Han on the June 4 broadcast of MBC’s “Section TV.”

Prompted by the host, each of them shared a little bit about their favorite pastime, like woodworking for Lee Chun Hee.

When the host asked about her love for scootering, Nam Gyu Ri shared, “I’ve just been modestly riding on my own for over 10 years. I have been riding one since I was young, but I just quietly ride by myself because a lot of people around me tried to dissuade me.” 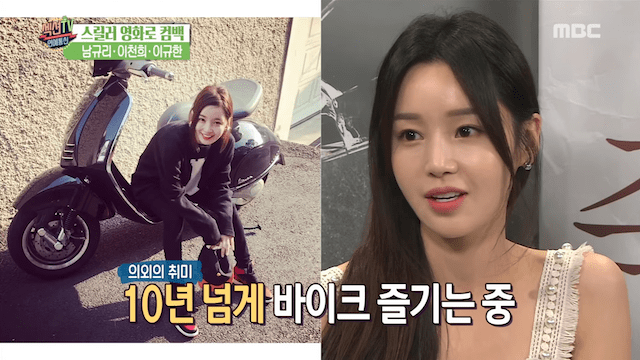 Lee Kyu Han seconded how much the actress loved scootering and revealed that she even owns “a premium, limited edition” scooter. Explaining how scootering helps her relieve stress, Nam Gyu Ri added, “It is my only source of entertainment.”

The actress also shared a related promise she made with her former co-star Jung Hae In. They previously acted as a couple of sorts in the 2016 drama “Yeah, That’s How It Is.” Nam Gyu Ri shared, ‘Jung Hae In also recently bought a scooter. We promised to scooter together but he has become so busy that we haven’t been able to do so.”

Meanwhile, “Deja Vu” was released in South Korean theaters on May 30.

Jung Hae In
Nam Gyu Ri
Section TV
How does this article make you feel?