5 Things We Love About Nice Guys In K-Dramas

The classic K-drama male lead is usually rich and or powerful, ridiculously attractive, and, more often than not, struggling with some dark backstory that triggers either womanizing tendencies or fits of blind rage. He always reforms, grows, and learns from the heroine, and we come to love him by the end of the season. But some dramas (those special few) start out with a super nice lead and just get sweeter from there.

Here’s our list of six things that nice K-drama leads do that get us wishing they weren’t so rare in dramaland.

Please, no more forced make-overs or surprise unwanted visits to our homes; that’s not quite romantic, sometimes it’s bordering on creeper level and we’re over it. Nice guys in dramas have the right idea! Like Enrique (played by the adorable Yoon Shi Yoon) in “Flower Boy Next Door.” Ko Dok Mi (played by Park Shin Hye) was so done with the world by the time this guy showed up, but he dragged her out of her comfort zone and they went to the beach! Look at that sand castle! What a nice treat.

Or how about that beautiful island in “Descendants of the Sun“? Yoo Shi Jin (played by Song Joong Ki) would never bring his girlfriend to the mall for a date! 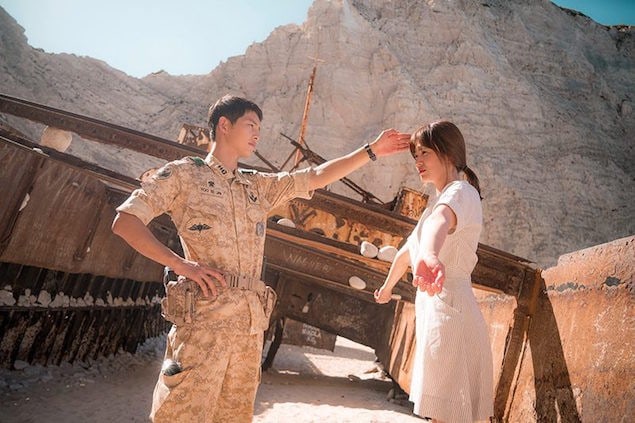 I mean, it’s not really romantic. A quick “Come over here” is just as sufficient, so why are drama leads dragging everyone around by their wrists? It’s so common in shows now that even nice characters are doing it!

3. They let the lead be happy

In “Let’s Eat 2,” Goo Dae Young (played by the charming Yoon Doojoon) sacrifices himself for Baek Soo Ji (played by Seo Hyun Jin) when he thinks she’s happily dating another man and that it’s not in her best interest for him to pursue her. No dramatics, no pressure, just a really nice guy who eventually ends up with the girl.

We see far too much selfish behavior from leads these days that’s painted as an act of desperate and unflinching love, but it’s not realistic. In the real world, that hot chaebol would be kicked to the curb for acting like a child.

Cha Do Hyun (played by the very talented Ji Sung) is a total mess in “Kill Me Heal Me.” His multiple personalities are ruining his life and leaving havoc in their wake, but he takes responsibility and cleans up after himself. When he’s not chasing other men around calling them “oppa,” he is a swoon worthy adult with real charm! Though perhaps part of the appeal of the character was the switch back and forth from nice guy to hot bad boy with any given episode… eyeliner really looked good on him.

Watch “Kill Me Heal Me”:

Ugh, there’s a lot of drama in K-dramas! And don’t get me wrong, I love it! I often find myself on the edge of my seat, popcorn falling out of my mouth as I gasp at the cat fight between the heroine and her boyfriend’s mother or the mad dash to stop the heroine from leaving the hero after he’s done something truly crappy. But if you’re looking for a drama with a lead you can pine after, you’re looking for someone positive. We can’t all be sunshine and smiles all the time, but it’s definitely something to aim for.

Remember this guy? In “Strong Woman Do Bong Soon,” Do Bong Soon (played by the lovable Park Bo Young) had eyes for a much broodier man, but couldn’t help being seduced by the adorable puppiness of this ray of sunshine! Hell, he buys her ice cream and writes their names in the sand; it doesn’t even matter that he looks like that… not a factor… didn’t even notice.

What do you love about nice guys in K-dramas? Let us know in the comments!