Seo Kang Joon And Gong Seung Yeon’s Relationship To Take A Turn In “Are You Human, Too?”

KBS’s new Monday-Tuesday drama “Are You Human, Too?” has released new stills that show a shift in the relationship between Gong Seung Yeon and Seo Kang joon.

“Are You Human, Too?” was off to a solid start after premiering on June 4, telling the story of third generation chaebol Nam Shin (Seo Kang Joon) and his bodyguard Kang So Bong (Gong Seung Yeon). She left an unforgettable first impression when he caught her taking paparazzi shots of him, because she valued money over her job ethics, and they are set to have another interesting meeting in the upcoming episode. Especially because the person Kang So Bong interacts with is actually Namshin III, an AI who was created to take Nam Shin’s place.

Nam Shin had suffered an accident while in the Czech Republic, with Namshin III taking his place. Just like how he had distracted Choi Sang Gook (Choi Byung Mo) to save Nam Shin, Namshin III appears at the scene of a fire to save people. He saves Kang So Bong from beneath a steel frame and it remains to be seen how things will progress from there. 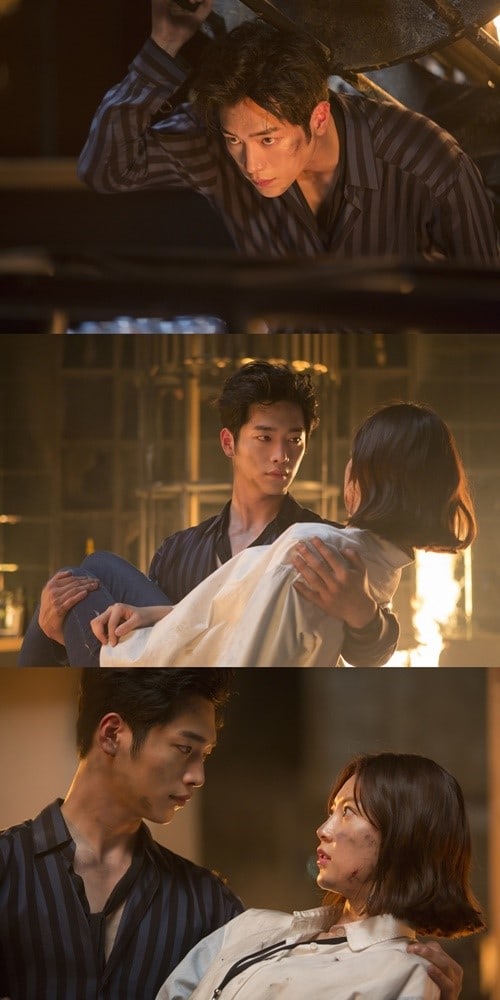 The production staff of “Are You Human, Too?” stated, “The scene shown in the new stills will be an important turning point for Namshin III and Kang So Bong. The change that takes place between the two will definitely be one to watch.”