With just eight days left until BTS’s fifth anniversary (June 13), the group released a new self-edited interview for fans as well as a never-before-seen dance practice for the 32nd Golden Disc Awards in a continuation of their 2018 BTS Festa celebration.

Check out the interview and dance practice below. 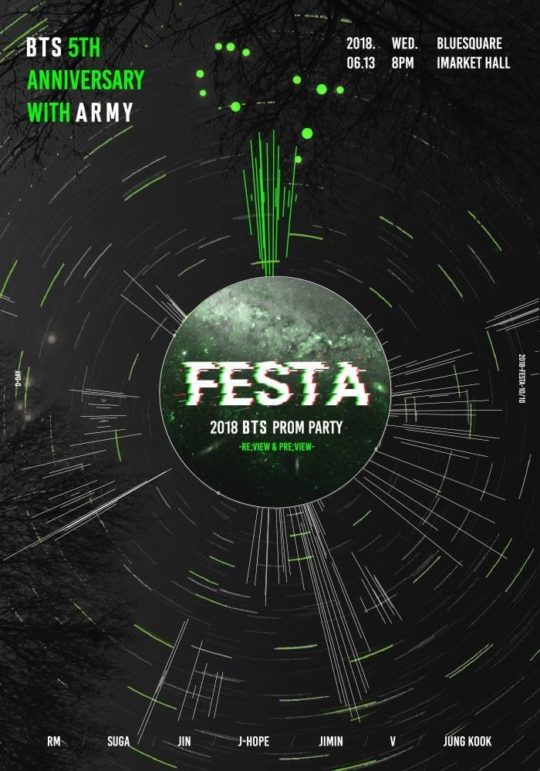 RM, black hair after four years ‘It feels like a wig’?!

Q: What was it like when you got black hair for the first time [in a while]?

Q: Why did you do the buzz cut?

RM: I just wanted to. When I entered high school, the school was so strict. I didn’t actually have to do it after transferring to a school in Gangnam. I was growing my hair out for a long time, and all of a sudden one day, it was uncomfortable. So on the way home one day, I went and shaved it off. It was so refreshing. At the time, I think I just did it because it was summer and it was hot. 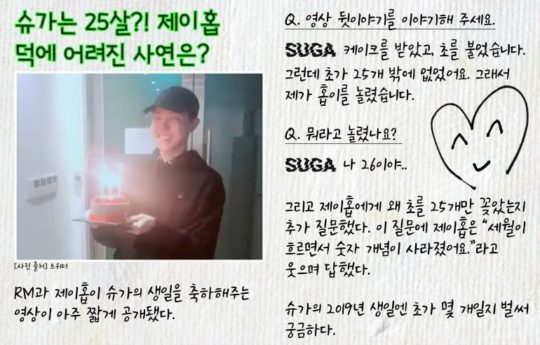 Suga’s 25?! The story of how Suga became younger because of J-Hope

Q: Tell us a behind-the-scenes story of the [birthday] video.

Q: How did you make fun of him?

Suga: I said ‘I’m 26..’ And I asked J-Hope another question about why he only did 25 candles. At this, J-Hope said, laughing, ’As time passes, my sense of numbers is disappearing.’ 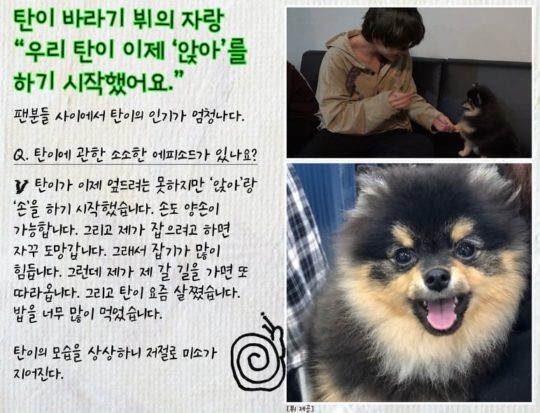 Q: Do you have a story about Tan?

V: Tan doesn’t understand the command to lay down, but he can sit and give me his paw. He can do both paws. And when I try to catch him, he keeps running away, so it’s really hard. But if I go somewhere, he’ll follow me. And Tan’s gained a bit of weight these days. He’s eating too much. 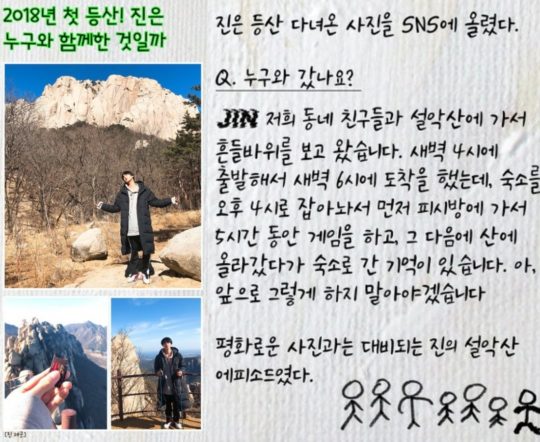 Jin: I went to Seoraksan with my neighborhood friends and saw the Heundeulbawi [a spherical rock]. We left at 4 a.m. and arrived at 6, but check-in time for our lodging was 4 p.m., so we went to a PC room and played games for five hours, went hiking, and then went to our room. We’re not going to do it that way again.

Q: How many ‘acorn bags’ [pouches] do you have?

J-Hope: I didn’t even know they were called acorn bags. I just found that they’re really comfortable, and you can really fill them up, so I kept carrying them. I didn’t know that they had such a cute name. If you ask me how many I have, honestly, I have a lot. There are ones that fans gave me and ones that I bought, so you’ll be able to see a wide variety of acorn bags from here on out. 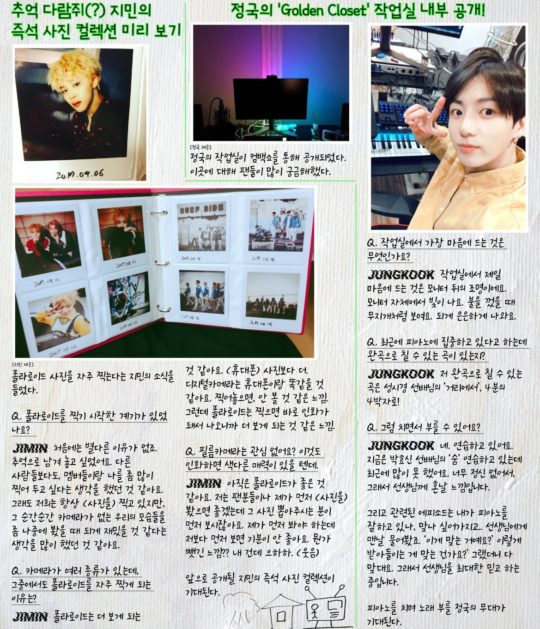 Q: What made you get into polaroids?

Jimin: At first, there was no real reason. I wanted to make memories. Rather than other people, I think I just wanted to take a lot of photos of me and the members. We’re always taking photos, but, later on, when we see these moments of ours when there were no cameras around, I think it’s going to be a lot of fun.

Q: There are a lot of different types of cameras. Why do you particularly like polaroids?

Jimin: I think you just end up looking at polaroid photos more. More than photos on your phone. And I think photos taken by a digital camera will be just like photos you take on your phone. You take the photo, but you don’t look at them. But polaroids are immediately printed, so it feels like you see them more.

Q: Do you have any interest in film cameras? Those would be fun to have printed, too.

Jimin: I still just like polaroids for now. I want our fans or me to be able to see the photos first, but for those, the person printing them for you sees them first. I have be the one to see my photos first, but if someone else does, I wouldn’t like it. Like something was taken from me? But it’s mine haha.

Jungkook’s ‘Golden Closet’: A look inside his music studio

Q: What do you like most about your personal studio?

Jungkook: The thing I like the most are the lights behind my monitor. The monitor itself has the lights, and when I turn off the lights, it’s like a rainbow. It’s very soft.

Q: I heard you were focusing on piano these days. Is there a song that you can play from beginning to end?

Jungkook: The song I can play from start to end is Sung Si Kyung’s ‘On This Road,’ in 4/4!

Q: Can you sing while playing it?

Jungkook: Yes. I’ve been practicing. Right now I’m practicing Park Hyo Shin’s ‘Breath,’ but I haven’t been able to practice much recently. I’ve been too busy. I think I’m going to get in trouble from my teacher. For a little story, I was wondering if I was actually doing well, so I asked my teacher every day, ‘Is this right? Is this how I’m supposed to do it?’ My teacher said yes to everything. So I’m just trusting my teacher right now.

“Jin’s rice cake soup. Honestly, if I’m to tell you a secret, it was really good, but it was a bit salty. I was really thankful. He woke up early in the morning to make it for us, and he really put a lot of love into it. Even if he griped that it was a hassle, I know he put his all into it, so when we ate it in the mountains, I remember it tasting so good. And I was joking when I said it was salty.

“The soup was really colorful. It was really good. And it was so touching how Jin woke up so early in the morning to make it for us. I was with R* and we ate it together while hiking. I don’t know if it’s because we were in the mountains, but it was very good.

Anonymous tip corner: I saw it… I didn’t know what to do so I was frozen for five seconds

“We recently went to a guest house for filming. I opened the door to go to the bathroom, but Suga was taking a selfie in the mirror. After seeing that, I didn’t know what to do and just stood there for five seconds. Suga said, ‘Hyung, could you close the door?’ and I said, ‘Oh, sorry,’ and closed the door. When I ran into Hobi afterward, we laughed so hard. 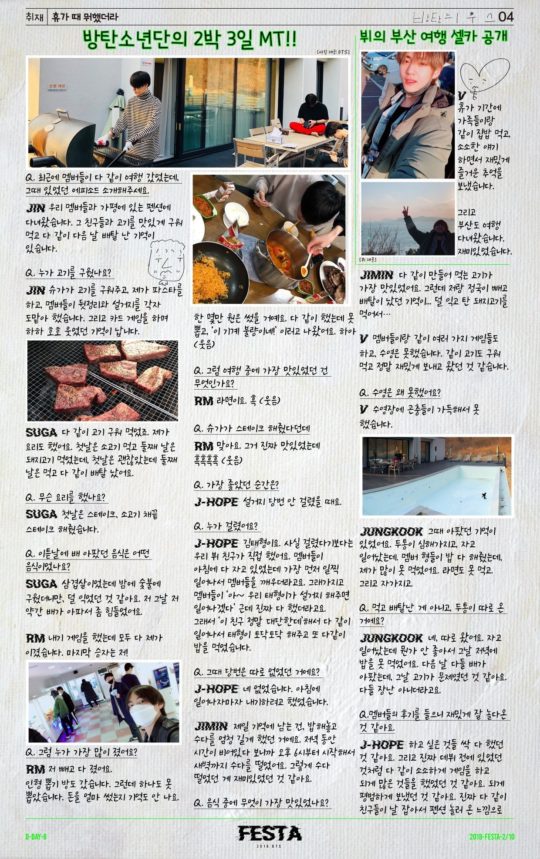 Q: You went on a trip with the members recently. Tell us something that happened.

Jin: We all went to a guest house in Gapyeong. We had barbeque, but the next day, we all got sick.

Q: Who was cooking the meat?

Jin: Suga cooked the meat, I made pasta, and the other members either cleaned up or did the dishes. And we had a lot of fun with card games.

Suga: We all had barbeque together. I cooked, too. We had beef the first day, and then pork the second. The first day was fine, but after the second day, we all got sick.

Q: What was the food that made you sick?

Suga: It was pork belly. We were cooking over charcoal at night, and I think it ended up a little undercooked. It was rough with the stomachache afterward.

RM: We played betting games, and I won everything! The last man standing is me!

Q: Then who lost?

RM: Everyone else. We went to do crane machines, but we didn’t get anything. I can’t even remember how much money we used. I think we used a couple 10,000 won. None of us succeeded, and I remember us all leaving, saying the machines were broken.

Q: What was the best food from the trip?

Q: But Suga also made steak.

J-Hope: When I didn’t get chosen to do dishes.

J-Hope: Kim Taehyung. Truthfully, rather than him having to do it, he just did it. In the morning, everyone was sleeping, but he was up first and woke everyone up. So we said, ‘If our Taehyungie does the dishes, we’ll get up,’ and he really did. We were really impressed, and when we got up, we patted him on the back and then ate together.

Jimin: What I remember most is that we made food, and then talked forever. We had a free evening, but when we saw the clock, we had started at 6 and talked straight through to the morning. That was really fun.

Q: What was your favorite food?

Jimin: The barbeque was really good. But everyone except for me and Jungkook got sick… It was just undercooked and burnt…

V: We played a lot of games together, but we weren’t able to swim. We had barbeque together, and it was a lot fun.

Q: Why weren’t you able to swim?

V: Because the swimming pool was full of bugs.

Jungkook: I remember being sick. I woke up and had such a bad headache. The members made food for me, but I wasn’t able to eat. Not even the ramyun, and I just slept.

Q: You didn’t get sick from the food, you just were sick?

Jungkook: Yea, it wasn’t the food. I woke up and I wasn’t feeling well, and I wasn’t able to eat. The next day everyone had stomachaches. I think it was the meat. It was intense.

Q: Sounds like everyone had a lot of fun.

J-Hope: I think we did everything that we wanted to do. And it was like before we debuted, when we just all got together to play games and do different things and hang out. It was so normal. It really felt like were were just a group of friends that took a trip.