Watch: Super Junior Brings Their Fun Energy To Dubai As They Hang Out With Fellow SM Artists Backstage

Super Junior’s Donghae and Yesung took fans behind the scenes of SMTOWN’s concert in Dubai through special clips as part of the new season of “Super TV”!

On June 5, XtvN released some footage that Donghae and Yesung filmed themselves for “TV in Super TV,” a spin-off of Super Junior’s second season of “Super TV.” The first videos were taken by Donghae as the group and fellow SM Entertainment artists traveled to Dubai for a stop in their “SMTOWN Live World Tour VI.”

While on the plane to Dubai, Donghae passed the camera to TraxX’s Kim Jung Mo. Donghae introduced him as a fan of “Super TV,” and Kim Jung Mo confirmed that he loves to watch it. TVXQ’s Changmin also came over for a visit on the plane, and Donghae and Changmin joked around about how Changmin prefers Eunhyuk. 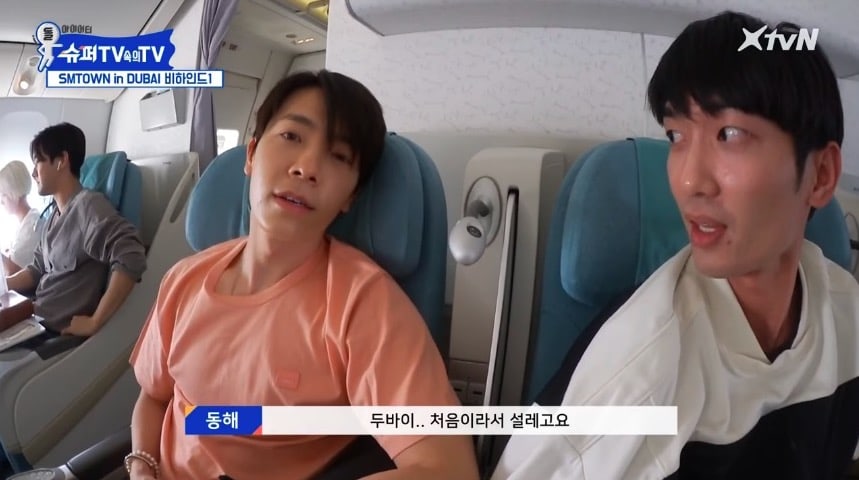 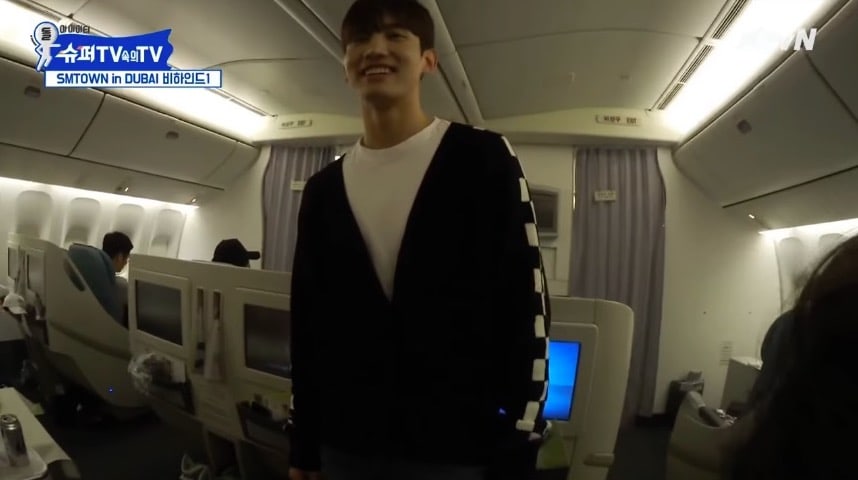 When Yesung was filming his own clips in the plane, he took fans on a tour, showing Choi Siwon, TVXQ, Kangta, and leader Leeteuk.

After giving a glimpse of Yesung rehearsing in Dubai, fans were shown Super Junior in their dressing room suddenly cheering as someone entered. It was none other than TVXQ’s Yunho, and they noisily welcomed him to their dressing room.

When Kim Heechul started singing and dancing, Yunho just wordlessly tried to stop him and ended up having to cover his ears and laugh as the guys got more and more chaotic.

Once Super Junior calmed down a bit, they all started to dance together for another camera, but it quickly descended into a party again as they began circling around Yunho, leaving him unable to do anything but give in and laugh. 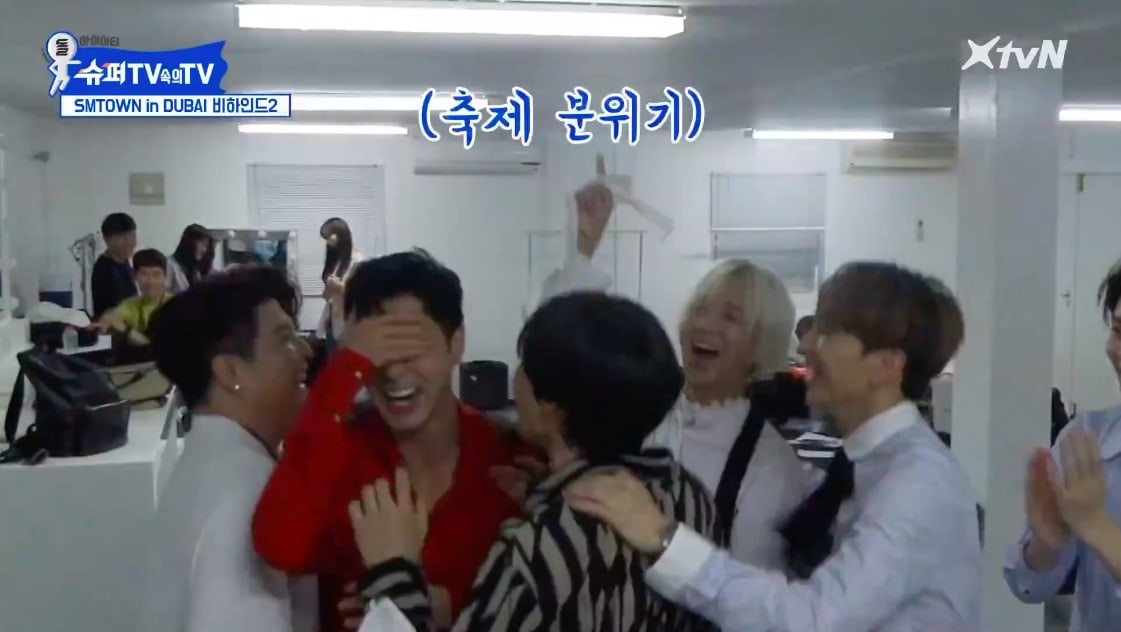 Yunho thanked the camera they had been performing for, but the Super Junior members then revealed that the main camera had been the “Super TV” one all along, capturing every second of the chaos.

Next up to visit Super Junior in their dressing room were members of NCT, who lined up to greet the guys formally as Donghae filmed them and smiled proudly. Eunhyuk jokingly asked them, “Do you guys watch ‘Super TV’? Do you know what it is?'”

They then realized that Yesung had snuck into the line of NCT members. Leeteuk asked him, “Are you a stylist?”

“I’m in NCT Dream!” replied Yesung. Leeteuk asked if he meant “MCT” instead, and said again that he looked like a stylist. Yesung turned to NCT and asked them, “Is it okay if I swear at our senior artists?” 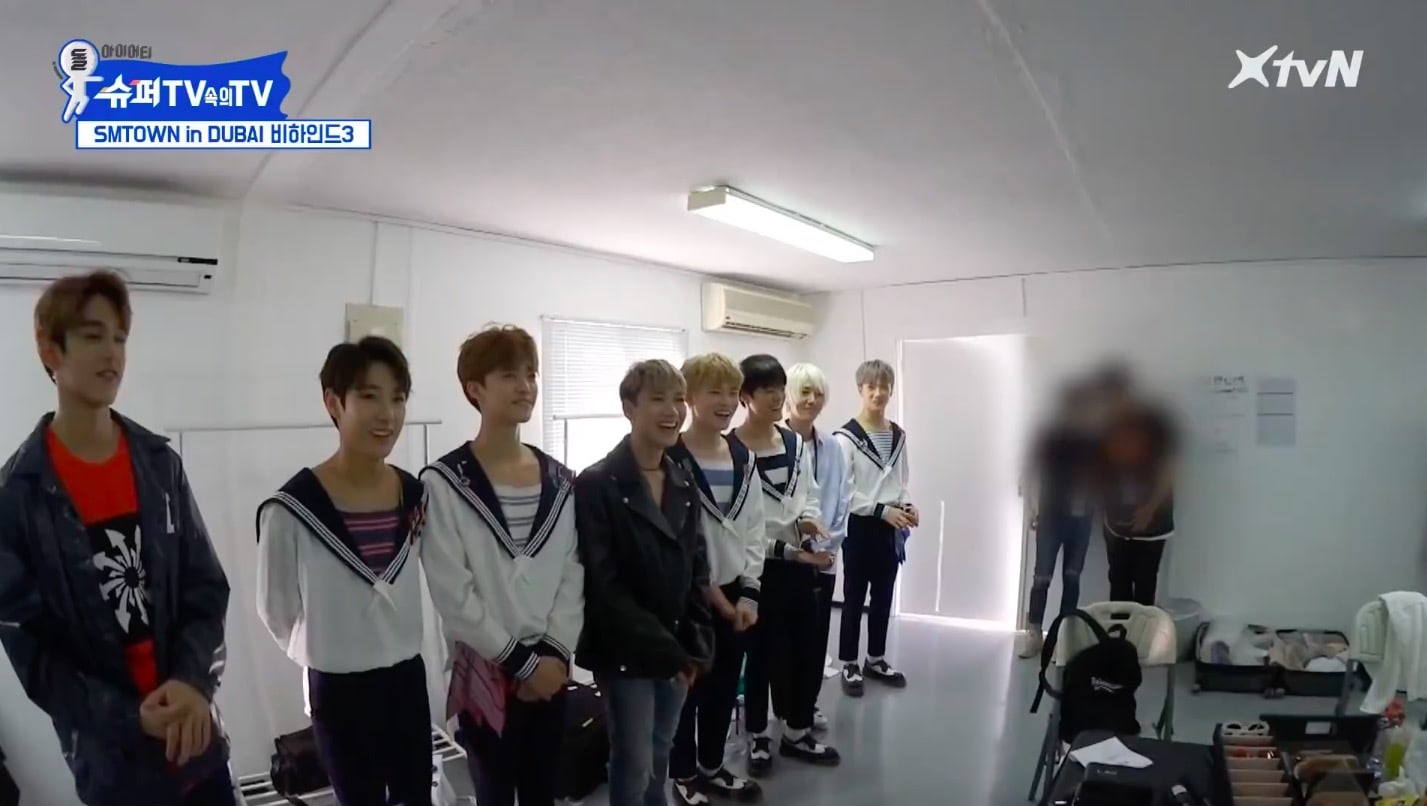 Yesung then led NCT out of the room by saying, “Guys, let’s go! Super Junior isn’t that big of a deal.” As they were leaving Donghae said, “Hurry, lock the door.”

EXO’s Chanyeol also came to visit the guys, who insisted that he tell everyone what Super Junior’s strong and weak points are. Chanyeol looked nervous about saying anything, but ended up hiding with the camera in a corner to talk about them.

“Super Junior’s strong point is that they’re really fun,” he said to the camera, watching the members to make sure they couldn’t hear. “When we’re at dinner together or I come to their dressing room like this, they take good care of me and are really fun.”

When Chanyeol returned the camera to Donghae, he told him that he hadn’t talked about their weak points. “Do you want to?” asked Donghae, which made Chanyeol laugh. Donghae added, “You don’t like talking that much either, right?” 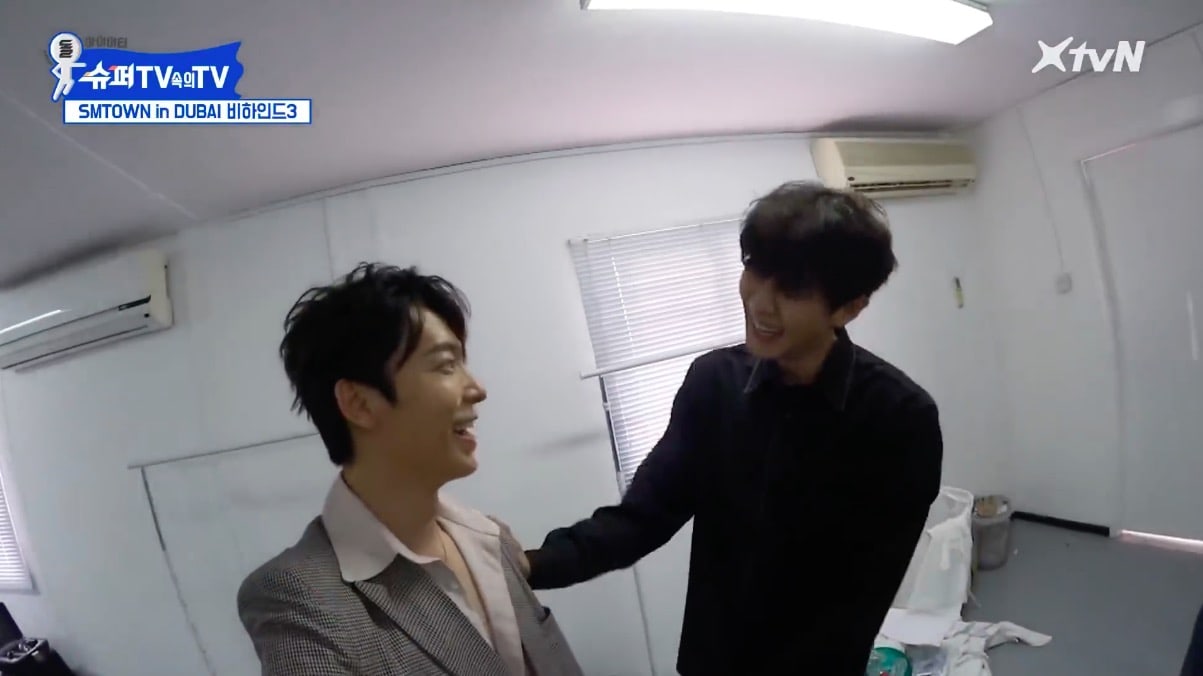 When a camera team for SMTOWN Live appeared in the dressing room, the guys greeted them excitedly. Leeteuk said, “The other dressing rooms are really quiet…” They then started yelling “Super Junior!” and “This is ‘Super TV’!” and dancing around.

Super Junior followed the camera team out of the dressing room, yelling again and bringing the party into EXO’s room, where Leeteuk gave them an on-the-spot interview and Donghae filmed his own reactions to their answers.

The clips also showed some special footage of the SM artists on stage during the show, including a visit from SHINee’s Taemin!

The second season of “Super TV” will premiere on June 7 on XtvN, and AOA will be making a guest appearance in the first episode.