Park Seo Joon and Park Min Young will be having a tense standoff while interviewing a new secretary in tvN’s Wednesday-Thursday drama “What’s Wrong with Secretary Kim?”

The drama is set to premiere on June 6 and will follow the story of a narcissist vice president of a company and his perfect secretary who wants to quit.

The new stills show Lee Young Joon (Park Seo Joon) and Kim Mi So (Park Min Young) sitting together to interview prospective new secretaries. While he has a cold expression on his face as he looks upon the candidates, she is smiling and asking questions. When Kim Mi So shoots Lee Young Joon an icy glare, he doesn’t stand down as his eyebrows move furiously to reflect his discontent. 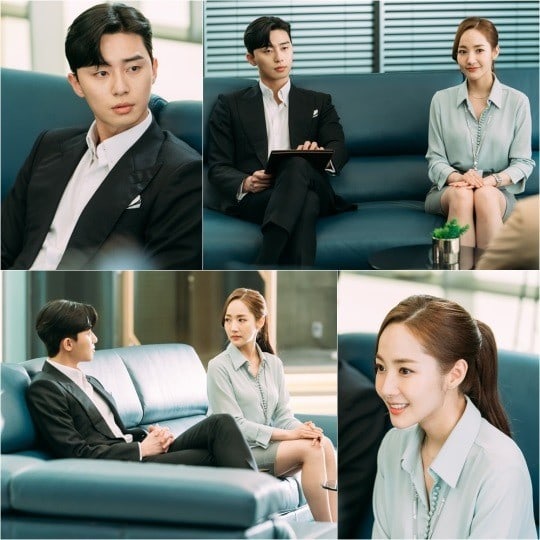 There will be an interesting tug of war between Lee Young Joon, who doesn’t want a new secretary, and Kim Mi So, who wants to pick her successor and leave the company. More tension is added as Lee Young Joon has found out why Kim Mi So wants to quit her job, and he finds himself feeling a little hurt.

The production staff of “What’s Wrong with Secretary Kim?” stated, “Today will be the drama’s premiere and the drama will be a fun, exciting, and relatable drama that viewers will enjoy this summer,” and “The cast and crew are working very hard, so please tune in to see the drama.”

“What’s Wrong with Secretary Kim?” airs every Wednesday and Thursday at 9:30 p.m. KST on tvN. The drama will also be available on Viki, check out the trailer below!