On June 7, the drama released tense new stills of the two actors from its upcoming episode. The photos show Lee Yoo Chan (played by Suho) and Min Tae Joo (played by Oh Chang Suk) in a visibly heated confrontation. In the stills, Min Tae Joo grabs a seething Lee Yoo Chan so tightly by the shoulder that Lee Yoo Chan’s suit jacket crumples under his grasp. 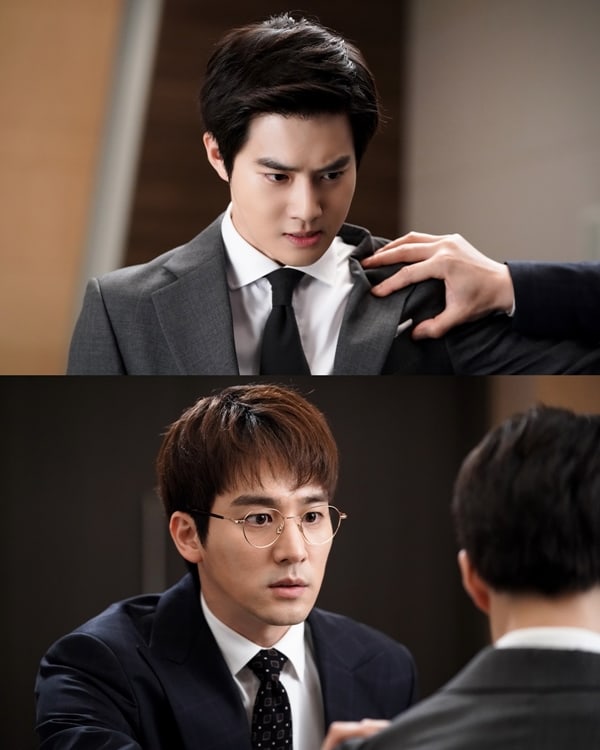 During the latest episode of the drama, Min Tae Joo attempted to strike up an alliance with Next In competitor Taesan Electronics in order to make the Big File project a reality. However, when Lee Yoo Chan learned that Min Tae Joo planned to hand Next In’s intellectual property rights to the project over to Taesan Electronics as part of the deal, he immediately backed out of the potential partnership.

Not only are Min Tae Joo and Lee Yoo Chan at odds over their company’s business dealings, but they have also become increasingly invested in a tense love triangle that revolves around Kim Bo Ra (played by Ha Yeon Soo).

The producers of “Rich Man, Poor Woman” commented, “The changes in the relationship between Lee Yoo Chan and Min Tae Joo are essentially the focal point of the newly beginning second half of the show. There is even more spectacular drama and romance lying ahead, so we hope that you stay tuned until the very end.”

To see what unfolds between the two friends and colleagues, catch the next episode of “Rich Man, Poor Woman,” which airs on June 7 at 11 p.m. KST!

If you haven’t already started watching the show, you can check out the first episode below: