June 7, AOA made their first radio show appearance since their comeback with “Bingle Bangle” on “Kim Shin Young’s Hope Song at Noon.”

On the show, Kim Shin Young asked Mina about the time she spoke informally to the CEO of FNC Entertainment after drinking. Mina said, “It happened a couple years ago, but it’s still talked about. It was pretty shocking.” After a concert, CEO Han Sung Ho of FNC said to Mina after having some drinks, “It’s so hard, Mina,” to which Mina responded with casual speech, “Oh, is it only hard for you? It’s harder for us.”

“Lee Hongki and other artists were there, too,” said Mina. “Thankfully, the CEO doesn’t remember anything.” 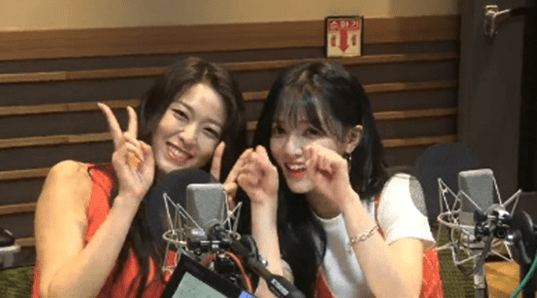 When asked about her friendship with actor Jung Hae In, Seolhyun said, “We didn’t meet on the set of the music video. We actually used to train together. His debut is our ‘MOYA’ music video. That’s why I said we were close, but he’s gotten so famous lately, [the ‘friendship’] is all people are really focusing on.”

AOA didn’t expect their song to do this well, saying that they didn’t even dream that it would make it to the top four on the charts. Mina said, “Honestly, we expected it to be No. 87. Our agency guessed No. 20-30, but we thought that was too high. We were so happy it was No. 4.” Seolhyun agreed that she thought the agency guessed too high, and Jimin likewise said she thought the song would hit around No. 52 on the charts.

The group also discussed actors that they’d pick to star alongside in a drama. Hyejeong said, “I’m a fan of Gong Yoo and Kim Nam Gil,” whereas Seolhyun said, “I’ve wanted to work with Jo Jung Suk since a long time ago.” Mina picked So Ji Sub, saying that he’s been her forever ideal type ever since she was a trainee.

AOA
Kim Shin Young's Hope Song at Noon
How does this article make you feel?