MAMAMOO’s Hwasa appeared as a guest on the June 8 episode of MBC’s “I Live Alone,” where she revealed what she’s like in real life.

As soon as she woke up, she turned on a movie starring Hong Kong singer and actor Leslie Cheung. Talking about how she’s a big fan of the actor, Hwasa said, “After watching the 90s movie ‘Days of Being Wild,’ I fell in love with Leslie Cheung. The look in his eyes is so different. I felt it in my heart.”

Watching her interview, Park Na Rae joked, “DId you lie about your age?”

Hwasa remained her real and authentic self throughout the show. She didn’t dress up or put on any makeup for the cameras. Instead of brushing her teeth, she gargled with water and scratched her legs with her long nails. At the studio, the cast members watching the clip laughed when they saw her hair in a loose bun. Hwasa said, “There was a time when my nose bled because I secretly picked my nose with my long nails.”

After eating cereal, listening to music, and airing her blankets, Hwasa laid on the floor, spaced out, and leaned against the fan. Laughing, Jun Hyun Moo said, “This is like a scene I saw [on TV] 20 years ago.” 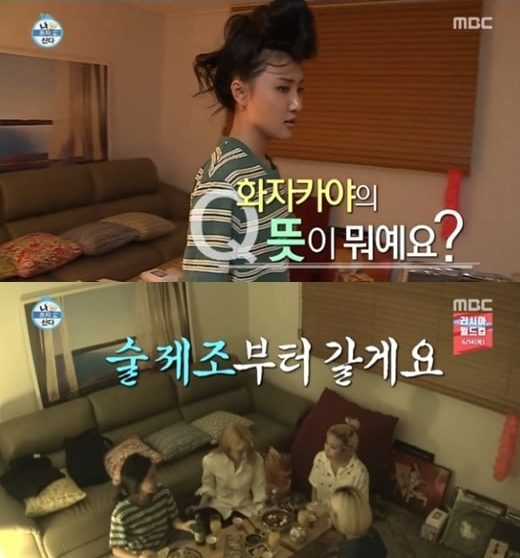 While cleaning the clothes in her closet, Hwasa revealed that she styles her own stage outfits. Park Na Rae praised her style when she said, “I often look at Hwasa’s stage outfits. I really like them.”

Hwasa also showed off her makeup skills. She explained, “I put on a lot of shimmer” and revealed that she puts makeup on her moles to make them darker. “I like having moles,” she said.

The girl group left her house and ate alone at a tripe restaurant. Park Na Rae was shocked that she could eat this alone, but Hwasa recommended it. She added, “I like meat that has a good balance of fat and meat. I can eat without paying attention to others, so I like it,” and continued to express her love for eating organs.

Hwasa then prepared to open her “Hwazakaya” for business, which is a combination of her name and the Japanese word “izakaya,” which is a type of casual bar.

She said, “I really liked seeing guests at Narae Bar, so I decided to open up Hwazakaya for the members.”

In her interview, Hwasa stated, “The members are my family. I think we’re beyond friends. It’s hard to find people who you can click with so well.”