Jun Hyun Moo and Han Hye Jin got into a playful argument on MBC’s “I Live Alone.”

MAMAMOO’s Hwasa appeared as a special guest on the June 8 episode. The cast watched the footage of Hwasa putting on makeup and making her mole darker. At the studio, Park Na Rae and Han Hye Jin asked Hwasa if she put makeup on her mole today as well, and she answered, “I already have a mole, but I draw on it to make it darker and more defined.”

Han Hye Jin said, “We cover it and make it disappear.” The MAMAMOO member explained, “I like my mole, so I draw on it to make it darker.” Jun Hyun Moo then commented, “That’s the point. It looks good on Hwasa.” 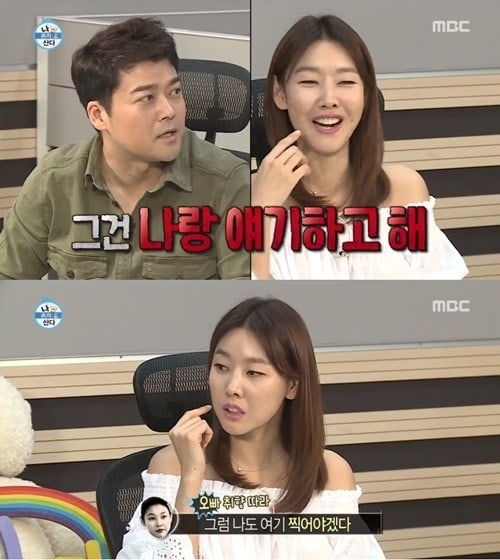 When the screen showed Hwasa eating alone at a tripe restaurant, Jun Hyun Moo smiled and revealed, “About two weeks ago, Han Hye Jin said she has to start going on a diet and asked for my understanding since she’ll become sensitive.”

He continued, “I was really prepared for it, but at night, she ordered and ate a late-night snack.”

Lee Shi Eon asked, “Does she drink too?” and Jun Hyun Moo replied, “Alcohol is a basic.”

Park Na Rae added, “Last time, when the members were eating meat together, Ki An 84 came a little late. Usually, we wait a bit and then eat, but Han Hye Jin said, ‘Another person’s coming so please cook meat on the grill next to us. I don’t like it stopping in the middle.'” Han Hye Jin then couldn’t stop laughing out of embarrassment.