SHINee’s Minho was surprised by his fans on MBC’s “Guys Who Cross the Line” (literal title).

On the June 8 episode, Minho appeared as a guest and joined Kim Gura, Lee Si Young, and Seol Min Suk on a trip to Jordan and Israel.

Minho showed up at the Incheon International Airport and many people gathered to take photos of the idol.

Seol Min Suk said, “You’re much more handsome in real life. I saw the back of you and idols are different.”

Lee Si Young then screamed like a young girl and said, “What do I do! It’s the first time meeting you, but you’re seriously handsome. You must feel burdened because I’m doing this. I’m sorry. I think it’ll be nice for the three of us to go [without Kim Gu Ra].”

When Minho arrived at the airport in Jordan, loud screams could be heard all around the airport. It turned out that many fans waited for Minho as early as 4 in the morning. 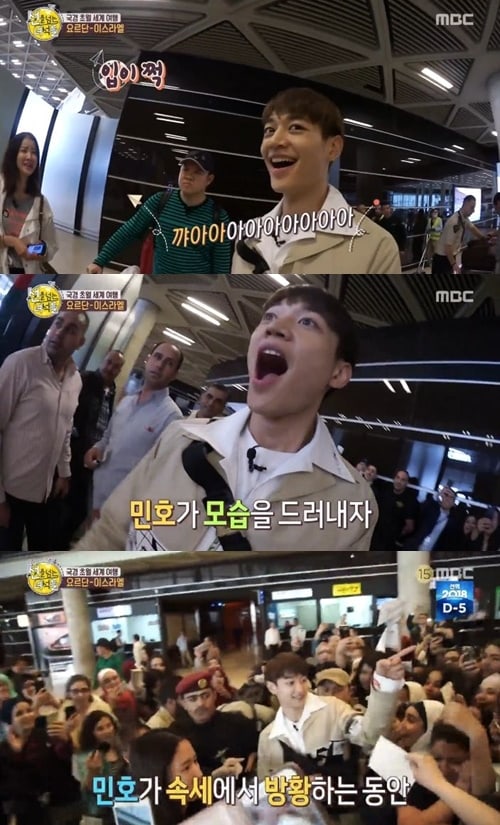 Minho was also surprised by his popularity in Jordan and the number of fans that showed up to welcome him. He quickly became surrounded by fans and was separated from the rest of the cast as he got out of the airport.

Some of the fans recognized Lee Si Young and asked for photos and autographs. The actress said, “I think they came to me because they couldn’t follow Minho.”

Kim Gura was also approached by fans who asked him to give Minho their letters. In the car, Minho said, “I’ve been to many airports, but this was the first time that they pet the back of my head.”

SHINee recently made a comeback with the title track “Good Evening.”