“About Time” is the story of Choi Michaela (Lee Sung Kyung), a woman who has the ability to see how much time people have left to live and knows she doesn’t have much time left, and Lee Do Ha (Lee Sang Yoon), a man who mysteriously has the ability to stop her countdown clock. Han Seung Yeon plays Jeon Sung Hee, Choi Michaela’s best friend and musical assistant director while Rowoon is Choi Wi Jin, Choi Michaela’s jobless younger brother who just wants to have fun.

The two characters are bringing more excitement to the drama, especially with what happened in the latest episode. Jeon Sung Hee and Choi Wi Jin wake up in the same bed after a night of drinking. She gets mad and shouts, “Didn’t I warn you that if we keep drinking, we’ll black out? What are we going to do now?” while he hurriedly replies? “We blacked out? But I promise that nothing happened last night.” With so many questions about what happened between them, an interesting romance has started to bloom between them.

In the new stills, Choi Wi Jin visits Jeon Sung Hee’s workplace and asks why she isn’t responding to his calls and text messages. He begins questioning her and she quickly covers his mouth with her hand and drags him away to somewhere that can offer them more privacy. 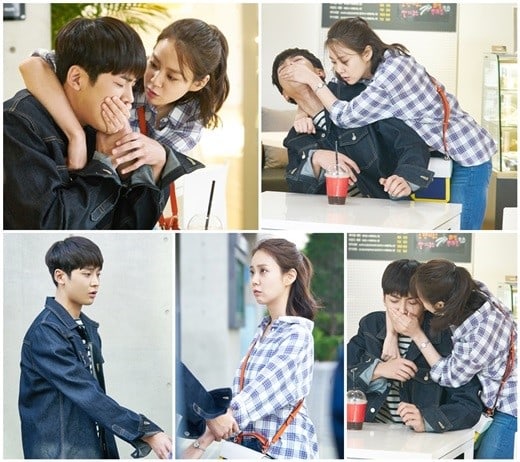 The production staff stated, “Jeon Sung Hee and Rowoon’s love line will kick off from the seventh episode, and they are set to breathe more life into the drama,” and “It will be an exciting and unpredictable romance that viewers will enjoy.”

In order to find out what Jeon Sung Hee and Choi Wi Jin discuss and where their relationship will go from there, tune in to the upcoming episode of “About Time” that will air on June 11 at 9:30 p.m. KST.

“About Time” is also available on Viki. Start watching the drama below!

SF9
Han Seung Yeon
Rowoon
About Time
How does this article make you feel?